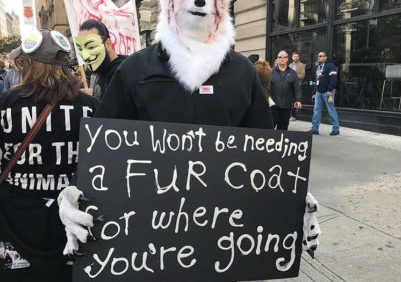 5 Easy Ways To Make Some Fast Cash Before The Holidays

Some thoughts for the forthcoming fur-wearing season:

There are people who pursue status/power symbols like fur coats who want to be feared, so their clouded idea about cruelty fulfills a tenant of power: ruthlessness. That’s why accusing them of being cruel plays into their egos – in their minds they’re being taken seriously and seen as a threat, like a Hollywood villain where the level of cruelty is often matched by sex appeal and power.

Others think that wearing fur is natural and brings them closer to nature; they see themselves akin to indigenous peoples by way of aesthetics (as opposed to contexts and conditions). For those people, an argument of cruelty, while they may express sympathy, is irrelevant because they see themselves as part of “the circle of life” where there is both compassion and cruelty, and it’s all part of a universal balance in the end. For confronting them, hard data matters most: the ecological impacts of fur, the history of extinctions due to fur hunting, and the very real and unnatural “imbalances” that result from concentrated animal farming operations like fur farms.

There are those who simply desire relevance through following trends and copying celebrities without much thought as to why (although this is also a form of pursuing power). For them, the cruelty isn’t vivid, but the idea of cruelty is a price paid for feeling important. In this case we must reveal that fur is ordinary, boring and that they are simply tools that an awful industry profits from by exploiting their fears of insignificance.

There are those who have fallen for the marketing that there is nothing warmer or more “eco” than fur (though there is), and that anything synthetic must be awful. It’s important to point out their choice to be concerned with synthetics only surfaces when there is an attempt to replace a sacred status-symbol like fur or leather. To them, a faux fur is a direct threat to keeping power accessible to the very few who can afford or acquire it. Question why they aren’t equally concerned with synthetics used to tan and finish leather [syntans, mineral oil, PVC, polyurethane, polystyrene], line coats [nylon, polyester], make athletic and yoga apparel [spandex], PET water bottles, running shoes, disposable coffee lids, toothbrushes, garbage bags, mattresses, etc?

There are those who have nostalgic attachments to their parents’ or grandparents’ garments. To them, the cruelty is in the past – and therefore irrelevant – and they are “honoring” both the animal and their ancestors by making use of it. So it’s helpful to point out that a garment being vintage does not erase its symbolic value . Ask if they would wear other symbols of cruelty or oppression just because they were vintage or an heirloom?

There are those who think of nothing but the immediate, tactile pleasure and beauty of objects in front of them. To them, fur is seen as a “good” and not a “bad” because beauty is seen as goodness in our culture. It’s useful to ask if something can truly be beautiful if it has a terribly ugly origin? Explain that their understanding of beauty or “good design” lacks depth.

What’s true in all of these instances is that animals’ bodies are seen as neutral vessels (a “material” devoid of individuality) that can be filled up with human meaning and that can represent generalizations that we like about animals – this is the definition of objectification.

What’s also true is that the general idea of cruelty is romanticized and abstracted for many people – it’s an idea or catalyst that plays into their identities, which is why showing the banal reality of the cruelty is useful in many instances, but can also backfire.

There is no singular tactic that will bring an end to the fur industry, and for that reason we need a multitude of approaches that address the reasons why people seek out this contentious symbol.