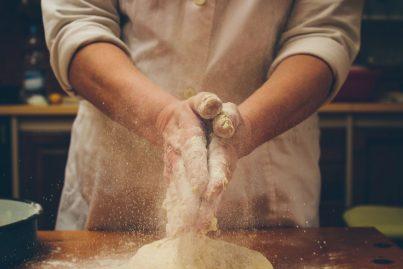 Leveraging Digital In The New World

“Help! All the restaurants are closed, and I don’t cook! What do I do?”

Been hearing that a lot lately.

In these scary sad times of the pandemic, not being able to cook seems like the least of our problems, but for many people it is a frightening reality.

Here in New York City, there are endless eateries that offer delivery and take out. The food industry is suffering terribly so yes, if you can afford to, PLEASE support them. But since NOW most of us are either out of work or working from home, or not exactly rolling in dough, why not use this time to do things we normally wouldn’t do? I’m not just talking about catching up on your favorite tv show (that too). Why not COOK?!

Not always so easy. Even for folks who do cook.

“Help! I went to the grocery store, and all they had left were squash and beans!”

Yeah, you might be running into the problem of not getting what you want in your local super-market. Especially toilet paper. (What’s that about? Save some for us!) But you can do a whole hellava lot with squash and beans.

Squash and bean soup for starters.

“We could only find Beyond burgers and carrots! What do you make with that?”

“I can’t find any garlic or ginger, and I’m making curry! What do I do?”

Let’s be real here; we are trying to cook with what we’ve got or can get. For the garlic, substitute garlic salt for table salt. It won’t be as good as garlic, but it won’t be bad at all. For the ginger, toast allspice in a dry pan until you can smell it. I am reminded of freshly baked cookies when I do this. Use the toasted allspice instead of ginger. Works nicely for jerk seasoning, too.

I’m a wedding caterer. We rarely do events smaller than 100 guests, so you can imagine what business has been like for us since early March. I couldn’t do anything about losing our ENTIRE SPRING WEDDING SEASON!!! *&^%$#@*. OK, OK, I promised myself I’d stop complaining; doesn’t help.

I had 50 pounds of carrots and onions in my walk-in fridge, a boatload of items in the fridges and freezers, and no events on the horizon. I was thinking it was time for one of the two S’s — Suicide or Soup. I decided on soup. I invited over two of my most beloved gal pal co-workers and made soup. A lot of soup.

It was fun, Well, mostly it was fun, because CC peeled the carrots and chopped the onions. Thanks, CC.

I cooked up huge vats of black-eyed pea soup, lentil soup and carrot ginger soup. Toasted the soup with some fine bubbly and sent the gals home with as much soup as they could carry. My way of saying,  “I know the world feels it’s ending, but have ten quarts of soup and four rolls of toilet paper.” Hey! It’s something.

What I learned living in downtown Manhattan after 911 was that doing something kind made you feel better and made everyone else feel better, too.

There are many people out there who are sick, some who are dying, most who are scared. I can’t do anything about that, but I can cook. I can help other people cook. I can give ideas for yummy feasts to prepare when ingredients you are used to getting just aren’t there.

I can give foodie love in the time of Corona.

Here are some cook-what-you-have recipes I put together for my two-ingredient deprived pals. Happy to come up with recipes and ideas for you too.

Soak a bag of dry beans in water overnight. You can use whatever kind of beans you got — white beans, navy beans, kidney beans, pinto beans. Float your own boat, baby. You want your beans totally covered, probably twice as much water as beans. When ready to cook drain the beans and set them aside. Peel and chop one large yellow onion. Peel and mince a few cloves of garlic. Peel and chop three regular size carrots and chop three celery stalks. Sauté onion, carrot and celery for five minutes then throw in the garlic and sauté another few minutes.  Throw in your beans and six coffee cups of vegetable broth. If you don’t have vegetable broth use water with a cube of vegetable bouillon. If you don’t have that, use water and sing it a song. Season to your liking with ground cumin, ground oregano, ground thyme, ground coriander, paprika (I love Old Bay if you have it), salt and ground pepper. Bring to a boil, then lower and simmer for an hour. Chop up three zucchini or yellow squash and three plum tomatoes. When your beans are soft, throw the tomatoes and squash into the soup. Cook another 10 to 15 minutes. Adjust seasoning with salt and pepper. When your zucchini is soft, your soup is done. You can garnish with grated vegan Parmesan if you like, but it’s good without it, too. If you don’t have any veg broth or bouillon, a spoon full of tomato paste jazzes things up nicely. It jazzes things up nicely, even if you do.

Beyond burger and Carrot Stir-fry

Peel and slice one whole onion and three carrots. Slice one red bell pepper and two scallions. Mince a few cloves of garlic, slice up a half a head of cabbage. The cabbage can be red or green. Crumble or chop up 4 vege burgers. Heat a few drizzles of oil in a wok or deep skillet. Over medium heat, sauté veg burgers. Cook and stir. Toss in sliced onions and carrots. After a five minutes toss in a good plop of minced garlic. When onions and carrots are starting to brown and get soft, toss in bell pepper and cabbage and cook till cabbage is soft. Drizzle in Chef Rossi’s Handy Dandy Stir-fry Sauce. Cook and stir fry until combined. If you have frozen vegetables like broccoli, peas, corn, string beans, by all means throw them in. They only need about five minutes to cook and get yummy.

EDITORS NOTE: You can now buy Beyond Burgers in bulk and keep ’em in the freezer!

Toss equal amounts tamari and sesame oil with a plop of sugar, brown sugar or maple syrup and a good dash of Sriracha. I prefer to puree a plop of minced garlic and ginger into this, but it’s good as is.

Rossi has written for The Daily News, The New York Post, Time Out New York, Mcsweeney’s, Bust magazine, hosts a hit radio show on WOMR, has been featured on “The Food Network” and “NPR,” and  is the author of the hit memoir The Raging Skillet.  She has just completed her second memoir “Queen of the Jews.”