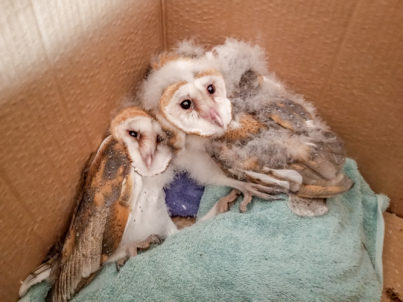 A bird or tiny creature lands in your yard, and it’s boiling hot. You want to help, but there’s a fine line between helping and hindering – and you can’t be sure of the right move. What to do? This article will solve that conundrum for you;

A recent heat wave in southern California that brought temperatures to 115 degrees and above was a learning lesson for some of us in terms of helping wildlife.  A friend of mine in Orange County, Kristin Lara, found an owl in her yard the second morning of those extremely hot days, who was alive but in distress and seeking shelter in her daughter’s playhouse on their lawn. Kristin spent most of the day trying to find someone willing to come help.  She was advised to place a large bowl of water in front of the owl, and that she should hop into the bowl.  Birds’ bodies and need for water are a little different than ours, so while people often will want to give birds droppers of water to drink, what they may need is to be in or have their feet in water.

Unfortunately, the owl was in too much distress to do so, and Kristin had been told as well that a grown owl could latch onto your flesh with their beak and tear it apart, so she was very wary and didn’t get too close.

After calling around for hours, a heroic rescue pilot named Jerry Phan made the drive from San Diego to help.  He sprayed the owl with water from a spray bottle, and Kristin wished she had known that was something she could have done to help cool her down. Very sadly, the owl passed away while at a rehabilitation center, as did a number of other owls in the area.  There were three baby owls found nearby however, whom they think may have been the babies of the owl in Kristin’s yard, that were found in time and are now soon to be released back into the wild.

The following is on overheating birds from Beauty of Birds Avian Web:

Treatment for any overheating animal is fairly consistent in that the first priority is to cool them off, get them to the shade or a cooler area if possible, offer them water, mist them with a spray bottle, and seek veterinary help if they don’t readily revive.

Keep Water Out For Animals

Keeping clean, shallow, sources of water available outside for birds and other wildlife is a wonderful thing we can do to help wild animals during the summer and in dry areas.  I had no idea the source of entertainment it would be for myself and real need that would be met for local, wild animals, when I put a glass dog bowl filled with water out on my front patio wall. I was thinking mainly about squirrels, who might need water, as it had been so dry here in California.  It hadn’t occurred to me that a dog bowl would appeal to birds, and it took them a few weeks to find it, but, since then, throughout the day, and all year long, squirrels and a wide variety birds come to the bowl to drink and bathe in it (see cute birds splashing around in the dog bowl from my instagram below).  I added a pedestal bird bath as well, but they seem to prefer the bowl.

How to spend a hot summer day (I need to get a real bird bath but still this is so cute!) #slpishsplash

If you have a water container with steep sides, like a dog bowl, keep a stick or something with texture on the edge for bees to climb on, as they tend to land in water and not be able to get back out.  Place a small stone in a birdbath for smaller birds to stand on.  Rinse and change the water daily to keep it free of bacteria and algae, and remember to refill it, as animals may count on it once they find it is there.

The dry weather also causes food shortages for birds who rely on seeds from vegetation, so providing a food source is another thing we can do to help them. Nature’s Outpost makes this very cool window bird feeder.  It has suction cups that hold it onto the outside of the glass, and a one-way mirror film that sticks to the window on the inside. This is truly remarkable, and better than a television, to have outside your window, as you can sit and watch birds, even from inches away from them, and they can’t see you on the other side of the mirror film.

Of course, you have to see what local experts recommend for your area as far as feeding wild animals, as you don’t want to attract, say, bears.

Another thing to consider is the sad fact that one of the biggest killers of wild birds is windows, which can be invisible to them at different times of day, or reflect the sky and trees like a mirror, and they can unknowingly fly straight into the hard surface. The Humane Society of the United States has these recommendations for making your windows bird safe. Personally, I was hearing birds hit my large, bay window this spring, and found one dead mourning dove on my front porch. That was enough to order some stickers and decals that make the surface of glass visible to birds, and I have not heard any hit my windows since then. (Interestingly, the window feeder I recommended seems to make the window more visible to the birds flying to it, even though it is attracting them to the glass, and that’s something I noticed in the review comments for the feeder as well. I still placed stickers around it, and drew some pretty patterns on the glass with a window marker, as a precaution.)

Proper stewardship of animals and nature, I believe, is one of humanity’s primary directives. A little help can mean a big difference to animals who need it. If you have space to garden, consider adding plants, trees and flowers that attract bees, butterflies, and birds, humming and other. My front yard looks like a scene from a Disney film, people comment on how many birds are around! And squirrels. Consider trying it, as responsibly lending a hand to, and making friends with, the outdoor animals in your world could be very worth the little time and investment involved, for both them and you.

Gretchen Ryan is a Los Angeles based artist and animal rights advocate who is currently undertaking a major new project; a powerful, uplifting, large format painting to inspire freedom from harm for animals who are being abused.  You can say you took part in the creation of this epic, historical painting by a master artist by subscribing to her Patreon.