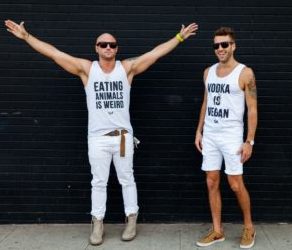 Eco-Labels Around the World [Interactive Infographic]

Matt and Phil Letten—also known as The Vegan Bros— overthrow many of the stereotypes of what a typical vegan looks like. Joining the ranks of famous athletes and celebs like Serena Williams, Miley Cyrus, Joaquin Phoenix, and Beyoncé, The Vegan Bros are the new face of veganism–loud, proud, and fighting for a better world, one plate at a time. In VODKA IS VEGAN: A Vegan Bros Manifesto for Better Living and Not Being an A**hole(Tarcher Perigee), being released tomorrow, the Bros have created a practical, funny, and persuasive manifesto for the adventurous, vegan-curious reader. The Bros favorite thing to point out is that most people are already 90% vegan without even thinking about it.

VODKA IS VEGAN is all about exploring that last 10% between your current way of eating and “going whole hog,” and showing you how to close the gap… all in the in-your-face, no-nonsense language that has become The Bros’ signature style. This book is for the vegans or vegan curious, who need a little help convincing their family and friends why their lifestyle is the bomb, and why they should try it, too. This isn’t a cookbook, and it doesn’t adhere to the woo woo, glamorized, luxury lifestyle that most vegan recipe books and manifestos tend to follow. It’s a lot of information, a little memoir, a lot of tough love, and 100% fun to read.

Along with each of the Bros’ own personal stories about becoming vegan—Phil became a vegan to champion animal rights, while Matt initially gave up meat for health reasons— VODKA IS VEGAN also includes quick tools, insider tips, and a highly detailed action plan to get you started on the road to a plant-based lifestyle, such as:

And now, enjoy an excerpt from the book – out tomorrow!

So you think trying vegan might be for you? You’ve thought about how eating meat hurts the animals, how it hurts the environment, and how it generally makes the world a worse place to be.

So what’s next? Are you ready to move toward a vegan diet? You literally just ate a hamburger yesterday. You can’t possibly be vegan.

Well, we’re here to say, “Yes, you can.” You can claim you’re not vegan all you want, but face the facts. You are. Some people take exception to that. There are a lot of people who haven’t yet accepted the vegan inside of them. Some of those people offer arguments against it.

Recently, we were approached by a dude at the dog park. We suspect that he was summoned by our conversation, debating whether we should have Beyond Meat tacos or Szechuan noodles with tofu for lunch. The dude, a man named Scooter, seemed offended at our rejection of meat and insisted that humans should eat whatever they please because, as he reasoned, “We’re at the top of the food chain.”

As he said this, he reached down to pet his dog, a tiny little puffball of a Pomeranian. And Matt said to Scooter, “Wow. You know what? You’re right. So how about we eat your dog?”

Phil grinned and replied, “But we’re at the top of the food chain, big guy.”

This is an argument we run into a lot. Some people seem to think that because we’re the alphas on planet Earth, that this entitles us to do whatever we want. And in a way, those people are actually correct. But if it’s okay to eat chickens or cows because we’re so successful, then why is it wrong to eat dogs or cats? It’s not like dogs are building their own cities or cats are inventing iPods. If being able to domesticate animals means that we can eat them, then it’s as right, or as wrong, to eat a cat or a dog or a parrot or a gerbil as it would be to eat a cow or a pig.

Other people have argued that it’s all about intelligence, that dogs are smarter than cows, and so we can spare the dogs and eat the cows. But pigs are smarter than dogs, and we eat them. Squid are also very intelligent, but we eat them. Ever hear of Inky? He’s an octopus who escaped from the National Aquarium of New Zealand by climbing up his tank, squeezing through a narrow opening, slithering down the floor of the building, and then managing to enter a  six-inch drainpipe that led to the sea. That’s some straight-up Houdini shit, and people still eat octopus. And the world is FULL of total idiots, and we rarely eat them.

A few weeks after our conversation with Scooter at the dog park, we were at the bookstore where Matt was buying ¡Salud! Vegan Mexican Cookbook, by our good friend Eddie Garza. We encountered a woman named Bertha. She noticed Matt’s book and decided her opinion was necessary, arguing that there was nothing wrong with eating meat. She made a really good point and almost got us, noting, “Animals eat other animals in the wild. So humans should do it, too.” We were baffled that we hadn’t realized that before.

But as we were on our way to Outback Steakhouse, ready to order a couple of dingo burgers, we got to thinking. And well, animals do lots of things we wouldn’t or shouldn’t do. Animals also sometimes rape other animals, eat their own young, and smell and eat one another’s shit. Very rarely do you hear someone say, “Well, if an animal does it, then it’s probably all right.” If that were the case, people would jerk off in public (monkeys), enslave their own people (meerkats), and kidnap and abandon neighboring children (emperor penguins). After all, animals do it!

Another point to consider is that animals do eat other animals, but they rarely factory farm other animals. And they seem incapable of harvesting soybeans or having a digestive system that can support a vegetarian diet. So in some small, some would say trivial ways, there are slight differences between humans and other animals. Also, we can use the Internet.

So we ended up deciding against the dingo burgers at Outback. But we’re still not sure if it was the right decision.

We’ll be honest, though. There is one argument that has a really good point. “What’s the argument?” you ask?

“But plants feel pain, too.” Yes, that’s right. We still don’t have an answer to this one because slitting a cow’s throat and watching her bleed out alive is exactly the same as mowing your fucking lawn. Do you get the point?

Here’s the thing. We love people who still eat meat. Many of you are our friends. But you say a lot of ill-informed shit sometimes: “We’re at the top of the food chain.” “Animals don’t feel pain.” “Lions eat other animals in the wild, so we should, too.” “Animals were put here for us to eat.” “Children are starving.” “If we stop eating meat, cows will take over the world.” Et-fucking-cetera.

And to be honest, we used to say the same things. But it’s weird when you think about it—  whenever we list reasons for eating animals, many of us seem to always conveniently leave out the animals that we love: dogs (and, fine, cats, too).

Think about that. Change those statements above, but include “dogs” in them. “We’re at the top of the food chain, so we should eat dogs.” “Dogs don’t feel pain.” “Dogs were put here for us to eat.” “If we stop eating dogs, they’ll take over the world.”

There are lots of reasons not to go vegan. Lots of arguments against it. The thing is, we just haven’t encountered a lot of good arguments against it. “My grandfather ate meat every day.” Yeah, and he also used to get polio. Things change and evolve and get better. Roll with it. “We need to thin the herd.” We’re just not worried about a chicken population explosion destroying the world. “Hunting is how I bond with my dad.” We have a lot of friends who used to bond with their dad while hunting. But as they got older they realized it’s possible to bond without killing someone, even in Texas. Point being—anyone can make an argument, but we haven’t met anyone who could voice the “we need to eat meat” position and actually get us to eat meat again.

So feel free to eat vegan. We can show you how.