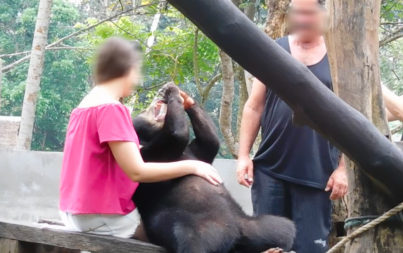 Finally: A Co-Sleeping Sized Mattress For The Family Bed

Less than a week after Animals Asia launched a campaign to stop a sun bear mother and cub from being forced to pose for selfies with tourists on the Indonesian island of Bali, the Jakarta government has responded with a pledge to review legislation around the distressing practice.

More than 11,000 people around the world have signed Animals Asia’s petition urging the True Bali Experience Elephant Camp to stop all wild animal selfies and interactions with the public at the facility which is popular with Western tourists, especially from Australia and the US.

The campaign was sparked by footage of 12-year-old sun bear Ajib seen virtually lifeless in the arms of a tourist posing with her. The footage also shows her seven-month-old cub Marsha trying in vain to wriggle away from staff wanting to make her ready for when the camp opens its doors to visitors.

Animals Asia and supporters of its petition are alarmed and shocked by the cruel exploitation of Ajib and her cub Marsha, who are forced to behave in a way that is completely unnatural to them and who have been denied the chance to bond with one another as they would in the wild.

“What is being done to Ajib and her cub Marsha is utterly tragic. Ironically, Ajib was actually rescued from poachers, but her rescuers are abusing their position by using her and her family to make money.”

“The tourists are being fooled. When they visit, they see two placid animals in a large grassy enclosure and everything seems very nice. They don’t see the tiny concrete cell where Marsha and Ajib spend most of their time, they don’t see Marsha’s lost childhood or the tell-tale signs of stress such as chronic paw sucking.

“The tourists are told that everything is ok, but this is far from the truth. What will happen when Marsha and Ajib can no longer be safely handled? What has been done to make adult Ajib so docile? Are they receiving veterinary care? Are they getting enough exercise and mental stimulation? Is their diet suitable? Are they able to express natural behaviours?

“The answer to most of these questions is absolutely not because the bears’ welfare is not the primary concern. This facility is being run for profit and the bears are being exploited.” 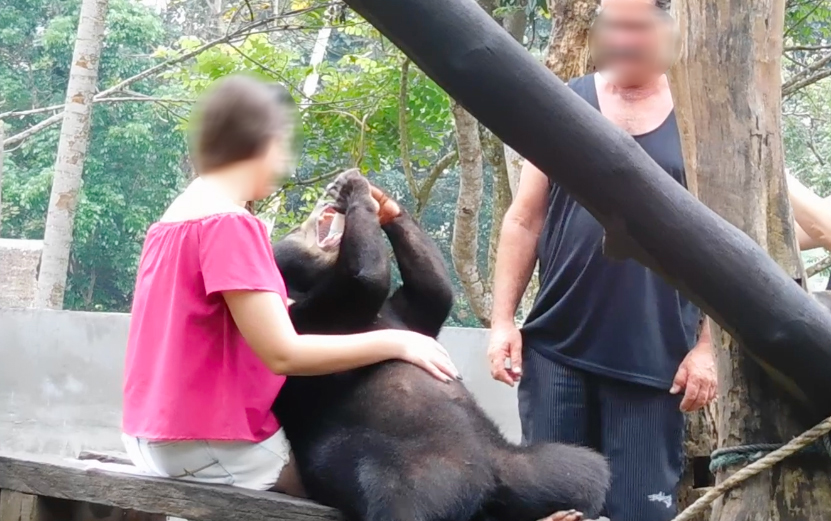 As of October 2017 the TripAdvisor listing for the Bali Elephant Camp was around 75 percent positive, implying that most tourists have no idea they are funding animal cruelty.

At present, the facility holds three sun bears and at all times one or two of the bears will be locked in the small concrete cell.

Enclosure access is rotated so that Ajib and Marsha are kept separate from the suspected male bear, presumably to avoid aggression. Both animals must be ready to “perform” all day every day whenever the visiting tourists – many from Australia and the US – arrive.

With the nearest sun bear sanctuary in Indonesia around 1,000km away on a totally separate island, it is highly doubtful that a transfer of the three bears would be feasible even if the True Bali Experience elephant camp agreed.

However, Animals Asia believes that should the tourist interactions end and management advice be taken on board, the welfare of all the bears could be vastly improved.

In response to the campaign and the outpouring of support it has received, Wiratno, Director General of Conservation and Natural Resources and Ecosystems at Indonesia’s Ministry of Environment and Forestry, acknowledged the importance of animal welfare and animal rights, and said a review of current laws was being considered.

“I will undertake an evaluation of such practices and carry out consultations with the public to gather technical guidance on this animal activity, and ensure there will be clarity. Now there is no clarity as to which activities are allowed and which are not,” Wiratno told theBBC’s Indonesian service.

The founder of the True Bali Experience complex said the facility is ready to stop the selfies with Ajib and Marsha if the authorities issued a directive banning animals from being used as photo props.

“If it is officially banned because evidence shows it shouldn’t be allowed, then we are ready (to ban it).”

Animals Asia’s petition also calls on the camp to improve Ajib and Marsha’s welfare – with help from the animal welfare organisation – by giving them outdoor access at all times and developing programmes to allow them to forage, play and act as they would in the wild.

Animals Asia had offered animal management advice to the True Bali Experience Elephant Camp in June this year to help them improve living conditions for Ajib, Marsha and a third male bear at the facility. However, when Animals Asia insisted that interactions with tourists end, the facility broke off communications.

“We welcome these constructive comments from the Indonesian government in the wake of our campaign, which highlights the critical importance of stricter legislation to end this cruelty. Facilities exploit wild animals to feed this insatiable international craze for selfies simply because they can. There are no laws to stop them.

“Imagine what would happen if there were and the strong message it would send from the very highest echelons of government. Imagine the difference that would make to Ajib, Marsha and countless other animals who have no choice but to submit to being poked, prodded and held against their will all day, every day.

“Many tourists would never knowingly endanger animals, they’re simply unaware of the appalling reality behind these pictures. Tourists see a cute animal but not the neglect and abuse she suffers. A ban on selfies with wild animals would stop animals like Ajib and Marsha from being viewed as commodities and take away a powerful incentive for poachers to plunder the wild for animals.”

Ajib and Marsha desperately need your help – sign the petition today calling on the True Bali Experience elephant camp to end the cruel selfie duty and implement welfare improvements. This will take you one second, and could change two lives immensely.