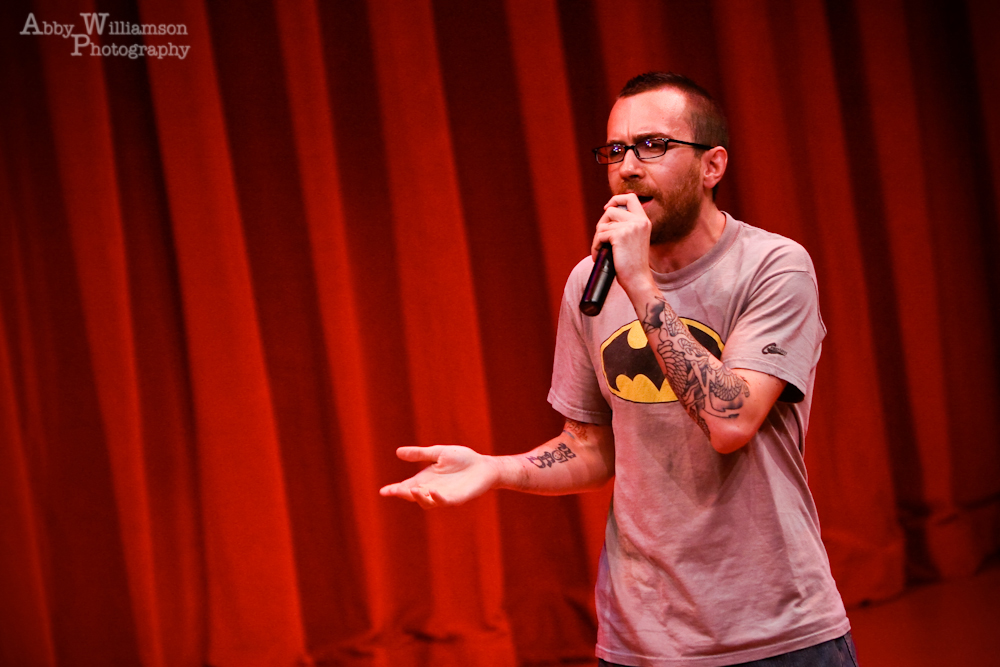 An Eco Fashionistas Dream, PLUS: Win!

Jamie Kilstein is hands down the funniest person we know. And he happens to be a vegan progressive badass of many colors. If you don’t believe we know from funny, read on. Oh, and if you live in LA, you’d be a fool to miss his performance this coming Monday eve!

We vegans aren’t just more immune to heart disease and cancer than most people, but we also have a superhero like immunity to dipshit insults. Having spent many Thanksgivings being lectured about our diet, while a drunken relative is elbow-deep in Turkey ass acting like they are the adults in the room, we have found ways to tune out their babbling and silently laugh. When Uncle Beer-Gutted Sloppy Mess asks us where we get our protein –like they’re diabetes makes them fitness experts– we can openly mock them, knowing they won’t be able to chase us for they can’t climb stairs. With that said, it is still tough to deal with. We know the pain of the animals, the tolls to the earth, and the names of the giant corporations profiting from our greed and ignorance. We know the amount of suffering that is in a glass of milk. So when someone attacks US for our diet, the first reaction is to drop your level, tackle them, and beat them with your kale-fueled fists. But here is what’s awesome: people are growing up. People are changing their lifestyles and accepting ours. And the people who aren’t? Well, they just look dumber and dumber every year.

So, I now present to you my top 5 favorite asshole arguments for why we need to eat and digest dead things:

Really?! Is that why “God” gave them mouths to scream, and legs to –I don’t know– RUN AWAY!?

When you’re chasing the cow down I-95 that just jumped a fence, and is sprinting for its freedom, are you saying to yourself, “Yup. All part of God’s plan. He sure knows how to design these things!”?

Nope! I’m pretty sure that animal doesn’t want to end up on some plate.

God also created children. How do we know they’re not the ones we are supposed to eat? He didn’t leave us directions!

Let me back up…I’m not advocating the cannibalization of children. I’m just saying if I had the choice between eating a cow that did nothing but moo in my general direction, or eat the kid running around the mall scream-singing You’re A Grand Old Flag, I’m BBQ’ing the kid. A baby cow has never kicked the back of my seat at a movie theater for two and a half hours, a baby duck never threw a fork across a Denny’s floor when I was stoned and sixteen in the scariest moment of my life. Fuck it. Eat the kids!

Yeah, I do, dipshit. Maybe not you, but most humans, which is why I don’t want us all dead by the age of 40, or on fire when the final ozone layer melts off. What about the immigrants at the factory farms? I care about them. Oh, but when you said “humans,” you meant “rich, white men,” because you’re an asshole.

I won’t be on a desert island ’cause it’s 2011 and I live in Brooklyn. But if I was, it would probably be awesome, and there would be a hatch, and a smoke monster, and really good character development, until they show a light in the door instead of a real fucking ending… but we are going to pretend that didn’t happen. I miss you LOST. I miss you so much.

Now, even if that was true, that means that even Hitler, THE GREATEST MONSTER THIS PLANET HAS EVER SEEN –when someone was like, “Hey man, you want to eat that chicken?”–Hitler was like… “That’s fucked up. dude! That chicken has a family! Grow up!”

1. “I didn’t climb to the top of the food chain to eat vegetables!”

Really?! You did that?! You, Frank from Staten Island, climbed to the top of the food chain for all of us? You went on a 24-hour boar hunt so you could feed the rest of the village?! You did that?! You went and dragged dinner home after catching it with weapons you made out of dirt and sticks?!

Or was it you, Frank from Staten Island, who drove your SUV two blocks to the store, then got out, did your sad waddle to the front, and had to ASK where the meat section is ’cause bright lights confuse you. Then you, FRANK from Staten Island, grabbed some pre-packaged dead thing that YOU didn’t even kill yourself (it was killed by illegal immigrants that are getting paid minimum wage with the bonus of “hopefully not being deported,”) then you, FRANK from Staten Island, have to give it to your wife to cook ’cause the last time you made dinner you burnt the hot pockets. Then you, Frank from Staten Island, put on FOX News, insert your hand down your pants and think, “yeah, it’s good to be at the top of the food chain.” Darwin would have killed himself is he knew you were what was coming!

So, embrace your “I heart Tofu” shirt. Proudly order your veggie wrap. Scream at the top of your lungs that you are a proud vegan because it’s not you that should feel bad for the choices you make. It’s these idiots.

Jamie Kilstein is a proud vegan and political comedian based out of Brooklyn. He has been seen on the Conan O’brian show, CNN, Showtimes The Green Room, and co-hosts wearecitizenradio.com where he and his partner Allison Kilkenny have interviewed such guests as Sarah Silverman, Janeane Garofalo, Rachel Maddow, Noam Chomsky, Howard Zinn, Bad Religion, Regina Spektor and more! Support Jamie, love him, cherish him.. he’s a national treasure. Watch him on youtube, listen to his radio show, check out his website, and twitter-stalk him. He won’t mind.

LOS ANGELENOS: Jamie will be preforming for one night only in front of fancy meat eating TV producers with no souls in suits. Come out and help this vegan get on TV again! Monday July 18th. Info and tickets here. TRUST US: You’ll laugh harder than you ever have before.