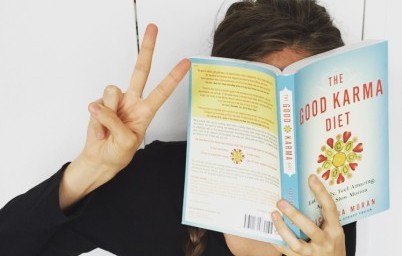 What Is BPA and How Can You Avoid It?

, just released from Penguin book. The book is chock full of kind, passionate, life-changing advice to shift your body and health to an entirely new dimension. Victoria is a queen – brilliant, beautiful, insightful – and anything she writes will 100% inspire you to live a happier life. But beyond that you need to read this book, as I have a very personal love story in the book that I’ve never shared anywhere else before, and it may just make you make a change in your life. If that’s not enough to get you to grab a copy of the book, here’s Victoria’s explanation for what Good Karma dieting actually is;

Good Karma eating is as simple as can be: comprise your meals of plants instead of animals, and most of the time choose unprocessed plant foods, meaning that they got from the garden or orchard or field to your kitchen with minimal corporate interference. This way of eating gives you good karma in two ways. The first is self-explanatory: by eating foods of high nutrient density and avoiding the animal products and processed foods your body can have trouble dealing with, you’ll reap the rewards of improved health. The second is a bit more mystical: you do good and you get good back.

As is true for life in general, it’s probably better to do this with unselfish motives, but even if your motivation is to become thinner, healthier, or more youthful, you’ll be doing something modestly heroic at the same time. This way of eating and living could lessen the suffering of billions of animals. I know it’s hard to think in terms of billions, but if you imagine counting the individual beings one at a time, you get some of the impact. In addition, ninety-eight percent of the animals raised for food suffer horrifically on factory farms before being slaughtered, often in adolescence. Every time you eat a vegan meal, you’re voting for something different.

This choice also lightens the burden on the planet. Raising animals for food in the numbers we do today calls for an exorbitant amount of water and fossil fuels. It leads to vast “lagoons” of animal waste, and the release into the atmosphere of tons of greenhouse gases, mostly in the form of methane. What you have here is holistic dining at its finest – body and soul. Eating whole, plant foods is scientifically validated as being both nutritionally adequate and anti-pathological. In other words, it cures stuff. Not everything. But reversal of such scourges as coronary disease and type 2 diabetes among people on this kind of diet has been repeatedly reported in the scientific literature; and the preventive potential of this way of eating is supported by ample research.

If this sounds great but going all the way seems impossible right now, go partway. Americans’ consumption of animal foods has, as I write this, been decreasing annually since 2007, primarily because non-vegans are making vegan choices some – or much – of the time. They fix a veggie-burger or black beans and rice, or they order their latté with soy, or have a green smoothie for breakfast so they’ll look prettier and — what do you know? — the statistics get prettier, too.

Once you’re fully vegan, celebrate! The only thing you need to “do” nutritionally that you weren’t doing before is take a vitamin B12 supplement of about 100 micrograms a day as a tiny, tasty, melt-in-your mouth tablet. B12 is not reliably found in plant foods unless they’ve been fortified with it, and lack of B12 is dangerous. This single missing element in a plant-food diet pains many vegans. If this is the perfect diet, it ought to be, well, perfect. But this is life on earth: extraordinary, magnificent, and absolutely not perfect. Bacteria in our mouths and intestines do make some B12, and maybe at some point in evolutionary history we all made enough, just as our long-ago ancestors made their own vitamin C and now we don’t. I look at taking B12 as a tiny surcharge for the privilege of being vegan. B12 can contribute to a healthy diet, you can get it by eating fortified cereals, beef and most fish (tuna sardines and trout) and it can help with red blood cell formation and anaemia prevention as well as supporting bone health.

If you hear yourself saying “I could never give up ice cream” (or something else), realize that you may just be short on vegucation. There are lots of rich, luscious nondairy ice creams on the market, and you can make exquisite homemade ice cream with only a DIYgene and an ice cream maker. If you have the information and you’re still saying “I could never give up. . .,” listen to yourself. You’re affirming weakness. You’re bigger than that. You can eat plants and save lives. You can give your life exponentially more meaning by living in a way that decreases suffering just because you got up and chose a kind breakfast.

Without this commitment, the Good Karma Diet would be, as much as I hate to say it, just a diet. To me, a diet is: “Eat this and don’t eat that, and feel guilty when you screw up, which of course you will because you’re only human, for heaven’s sake, and nobody can be on a diet forever.” That doesn’t really make you want to say, “I’ll have what she’s having.”

Understand and embrace the compassion piece, the conviction that you’re here to make life easier for others, regardless of species, and then everything else – whatever tweaks you might make because of an allergy, a digestive peculiarity, a personal preference — will come with little effort. This lifts that word “diet” from the deprivational depths and restores its original meaning from the Greek diaita, “a way of life.” And this particular way of life is one replete with meaning and fulfillment and joy.

Victoria Moran is the author of twelve books, including Main Street Vegan, the best-selling Creating a Charmed Life (in thirty languages), and the plant-based weight-loss classic, The Love-Powered Diet: Eating for Freedom, Health, & Joy. Cited by VegNews among the Top 10 Contemporary Vegetarian Authors, Victoria appeared twice on Oprah and she’s one of the celebrity coaches for the PCRM 21-Day Vegan Kickstart. She is a certified holistic health counselor and holds the T. Colin Campbell Center for Nutrition Studies/eCornell Certificate in Plant-Based Nutrition.

Her articles have appeared in Yoga Journal, Mothering, Natural Health, Woman’s Day, VegNews, and Vegetarian Times. Her work has been noted in USA Today, the Chicago Tribune, The Washington Post, Self, Elle, Glamour, Allure, and O, The Oprah Magazine. Victoria is a sought-after speaker, host of the popular Main Street Vegan podcast, and founder and director of Main Street Vegan Academy, training vegan lifestyle coaches and educators. Follow her on Twitter @Victoria_Moran and on Facebook at Main Street Vegan.

Excerpted from THE GOOD KARMA DIET: Eat Gently, Feel Amazing, Age in Slow Motion by Victoria Moran, with the permission of Tarcher/Penguin, a division of Penguin Random House.

Copyright © 2015.
From “The Good Karma Diet” By Victoria Moran