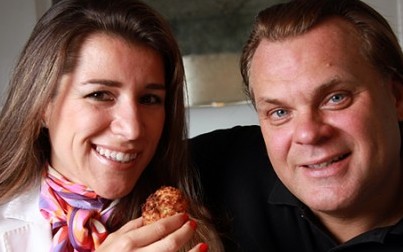 No, that isn’t the punchline to a joke.. it’s the true story of Fernanda Capobianca and her husband Francois Payard.

Watch this great piece on ABCNews on Fernanda’s new bakery Vegan Divas and how they reconcile their vegan/ non-vegan love affair;

When we met I told him I was vegan and he was laughing,” said Fernanda Capobianco, a vegan. Of course he was laughing, he’s Francois Payard, a famous French pastry chef whose sweets are laden with butter, eggs and cream, the very things vegans don’t eat. But wouldn’t you know it; he fell in love with Fernanda Capobianco, a vegan. I think the vegan world is becoming bigger and bigger, and I understand I live with her. In life you have to become a little bit open minded,” Payard said. So here’s the French pastry chef eating Fernanda’s vegan desserts at her very own bakery, Vegan Divas on the Upper East Side. Instead of traditional baking ingredients Fernanda uses egg substitute, coconut oil, tofu, you get the idea. The challenge was to have a bakery, everything has to look beautiful and taste good,” Capobianco said. Consider the mousse, it looks so French. “This mousse is made with tofu. We use Carbonet chocolate,” Capobianco said, “The whole container is 42 calories.” Everything made there is animal free, low cal, kosher and dairy free, and in just a matter of a couple of years, Fernanda’s seen an increase in interest in vegan foods. “I would give the pastries away. Now, when we say the word vegan they jump on it, really amazing,” Fernanda said. While her husband eats vegan at their home, he’s not about to offer vegan items in his own shop, he’ll leave that to Vegan Divas. “I think in New York there’s always room for everyone,” Payard said. Vegan Divas is flagship store is on First Avenue between 74th and 75th Streets, but the Vegan Divas treats are sold at stores throughout the city.