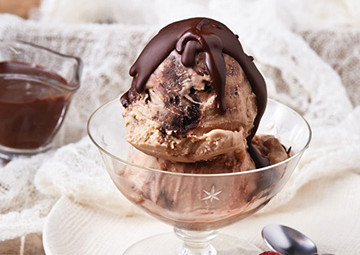 You’ve Never Had Vegan Ice Cream This Incredible Before

Smucker’s Magic Shell—the chocolate sauce with the waxy taste and hydrogenated oil that hardens on ice cream—has the distinction of being the only junk food my mom didn’t stock. But then again, she liked her ice cream straight up. I preferred the Carvel ice cream version in which cones were dipped in a similar waxy liquid chocolate that hardened im- mediately on the cold soft serve twist. After a futile search for the name of this favorite forgotten Carvel treat, I turned to my Facebook and Twitter friends. Based on the volume of immediate answers, it was clear I was not alone in my fond memories of the Carvel Brown Bonnet. Turns out, this magic ice cream topping, which is hard but slightly chewy, is super simple to make and requires only three ingredients (chocolate, vanilla, and olive or coconut oil). The best-tasting in my opinion—and in the opinions of many tasters—was a chocolate ice cream shell made with mild tasting olive oil. Just use good chocolate for the best tasting topping, but after that the flavor possibilities are endless. A mint-flavored variation follows the recipe.

Preparation
Place the chocolate in a small heatproof bowl and set it in a saucepan of very hot water over the lowest heat. Allow the chocolate to melt undisturbed until about two-thirds is melted.
Remove the saucepan from the heat and stir with a silicone spatula until all the chocolate is melted. Stir the oil into the chocolate until incorporated. Add the vanilla.
Keep the shell in liquid form until ready to pour over the ice cream— do not refrigerate.

Keeping
Store the Chocolate Ice Cream Shell in a jar in the refrigerator for up to two weeks. It will harden. To warm before using: place the jar in a small saucepan. Pour hot water to reach about halfway up the sides of the jar and warm over the lowest heat until liquefied.

Variation
Mint Shell: Add 2 or 3 drops of pure mint or use or 1⁄4 teaspoon good quality mint extract, or to taste.

Fran Costigan is internationally recognized culinary instructor, recipe developer, and innovative vegan pastry chef, and the author of three cookbooks. A graduate of the New York  Restaurant School and the Natural Gourmet Institute, Fran was a pastry chef in both traditional  and vegan restaurant kitchens. Today Fran teaches her distinctive courses (including her Vegan  Baking Boot Camp Intensive®) in her hometown of New York City at the Institute of Culinary Education and at the Natural Gourmet Institute and at major events throughout North America and Europe.