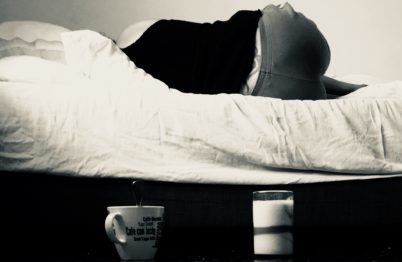 Before I even took the pregnancy test I was afraid of bleeding.

I hadn’t planned to be pregnant. The timing was terrible. Just a month earlier part of my family survived getting hit and overturning on the highway. I was panicky all the time. A February baby wasn’t ideal for my work schedule. We already had two perfect kids and weren’t quite ready for more. And as it turned out, it wasn’t meant to be.

Oh, but I wanted it. That baby that I could just barely start to imagine. My youngest, then three, as a big brother. His big sister as the ruler of them all. I could envision them all in my new, post-accident car, a minivan. A winter baby when my other two were summer ones. The completion of our family. The answer to our, should we have just one more?

I waited until I knew the test would be accurate. I peed and it turned immediately positive. I was pregnant again. We knew just how it would be – the flavor of each trimester, the fatigue, the joy, the upheaval to our lives. We were scared, more than the two times before, but still, shocked and in love already. I stopped throwing out my favorite kids clothes. I booked a dating ultrasound, even though I had a good idea of when conception occured. We told our kids.

Our youngest came with us to the first ultrasound – he wanted to get a picture of his baby brother or sister. We waited and explained everything to him as we went along. That he wouldn’t see a baby, but just a little smush of cells, and if we were lucky, the little flicker of the heartbeat that would join our tribe.

“Well, it could still be a little early.” And on the screen I saw that little baby drop out of my arms. I watched the early morning light that I would nurse in fade suddenly, sucked into the blackness on the screen. A hole, a gaping void, a empty gestational sac where my baby should have been.

The technician measured and clicked and chattered. My husband squeezed my hand, seeing my worried expression, but not quite understanding what I instinctively knew; There would be no baby in February.

Then came the waiting. It came in phases, I measured it by the moon. I no longer knew what day it was. Only that the doctors kept telling me that it might just be too early. That they wanted to wait to confirm anything. They wouldn’t even use the word: ​Miscarriage.

I lay in the backyard. It was May and we had a hammock up between two trees. All I could see was the leaves against the sky. I called my father and told him I couldn’t breathe. I could only, barely, force myself to walk inside and drink a glass of water. Any other action was out of reach. I wouldn’t leave the house for fear of bleeding to death. I wasn’t losing only a baby, I was losing myself. He told me it was the chemicals, the sudden shift, the ground moving beneath my feet. He said words like progesterone and oxytocin. I couldn’t hear him, everything was so far away. Just keep breathing he said. In and out, he said. I held to that like a mantra. I don’t remember anything else.

And then finally part one of waiting was over. They confirmed via ultrasound that the gestational sac wasn’t growing. I had three choices: Schedule a D&C, get a prescription for a chemical abortion, or wait. The ObGyn handed me my options on a single sheet of paper. She told me waiting was the riskiest – she told me to call the office I had any questions. She didn’t ask how I felt. She didn’t notice that my hands were shaking.

I went back to the hammock and waited to bleed. Days passed. Friends called. Meals were eaten. It was June and Kindergarten graduation for my eldest. She sat on stage and they read out loud, “​I’ll love you forever, I’ll like you for always, as long as I’m living, my baby you’ll be.” I sat there and wept hoping that the parents around me would think I was moved to tears by my little girl leaving Kindergarten. But that wasn’t it. I was crying because I was waiting. Waiting to bleed out the remains of the baby that would never have her as a big sister. On Monday morning I saw the first threads of blood.

Wednesday was my son’s last day of preschool party. I threw up twice before I called another mom and told her I couldn’t go. The room was spinning and it wasn’t from blood loss. She told me she’d pick me up, that I should be there, that it was important. She showed up and I got into her car. All I know is I didn’t run away. She drove us there and home and I didn’t die. And then I kept waiting. I waited until at 5:30 AM a week later something pushed against my cervix. Though painless, it wanted out.

In our culture we often see mystery as enchantment. Secrets hold us spellbound and the unspoken holds promise. Death and dying are cloaked in shadow, often rendering them tantalizing. Let me assure you, miscarriage is not this. Far from sexy, it is birth’s sister, and yet eerily silent. It is hours of blood and weariness. It so empty it is utterly hollow.

I sat there for days – lost, regretful, terrified and in pain. Grasping at mere strings of reality as clusters of cells and blood poured out of me. No one warns you for this. My thoughts turned on themselves. It was clear I hadn’t wanted this baby enough. The guilt rushed in and shattered every rational thought and replaced them with pure fear. Every ultrasound and blood draw, a new invasion. They’d tell me to wait a month before we “tried again.” I nodded my head because I didn’t have the strength to tell them that I didn’t deserve another baby. They didn’t know how powerful a mother is. They couldn’t know how my fear had forced this into being.

Later that night I sat at my desk and I opened the envelope thinking it was yet another bill. It was, instead, a succinct closure: “​No retained products of conception.” And suddenly, it was over. I wasn’t pregnant.

And now it’s February and I remember everything.

I used these herbs and supplements to help my long recovery.

Shop my brand recommendations here. Want personal recommendations? I’m happy to support you. Email  info@calm-a-mama.com for a quick response any time or call in to 401 484 8845 Tuesday between noon and 1PM EST.

Hannah Garrison is a Providence, RI based entrepreneur. She is the Creative Director of Wear Your Music an online retailer of guitar string bracelets, and the Founder of Calm A Mama, a natural supplement company. Garrison also offers mentoring and coaching to other women in business. She’s the mama of two rambunctious kids and makes granola to die for. She has one excellent pair of red pants and a boot collection she polishes herself.