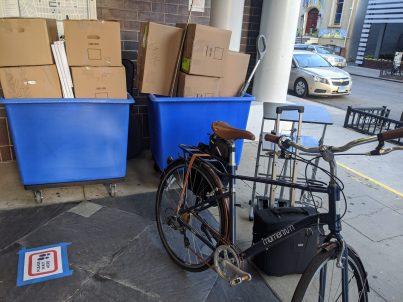 How One Woman Made It Her Mission To Feed The Hungry In Durham, North Carolina

My name is Ann Van Epps and I am a comedian and people person who co-founded a small business called Brains and Brawn Movers and Packers as a response to the Corona Virus hitting NYC. Want to know how a comedian starts a 2 person moving company? Keep reading! I graduated from Savannah College of Art and Design 2 years ago and moved to NYC shortly after to pursue comedy. When the pandemic hit, the entertainment industry shut down and my partner (a working actor and producer) and I were looking for work.

This whole thing started 5 days before the shutdowns I had what was supposed to be a one off gig where my partner and I were hired to pack and store a friends’ son’s dorm room. Students at NYU had left for spring break and then were in a panic when the school told them they only had five days to come and retrieve their belongings.

I connected with the Mom, and learned that other students needed this service as well. We ended up packing, shipping, and storing 13 dorm rooms in 5 days! 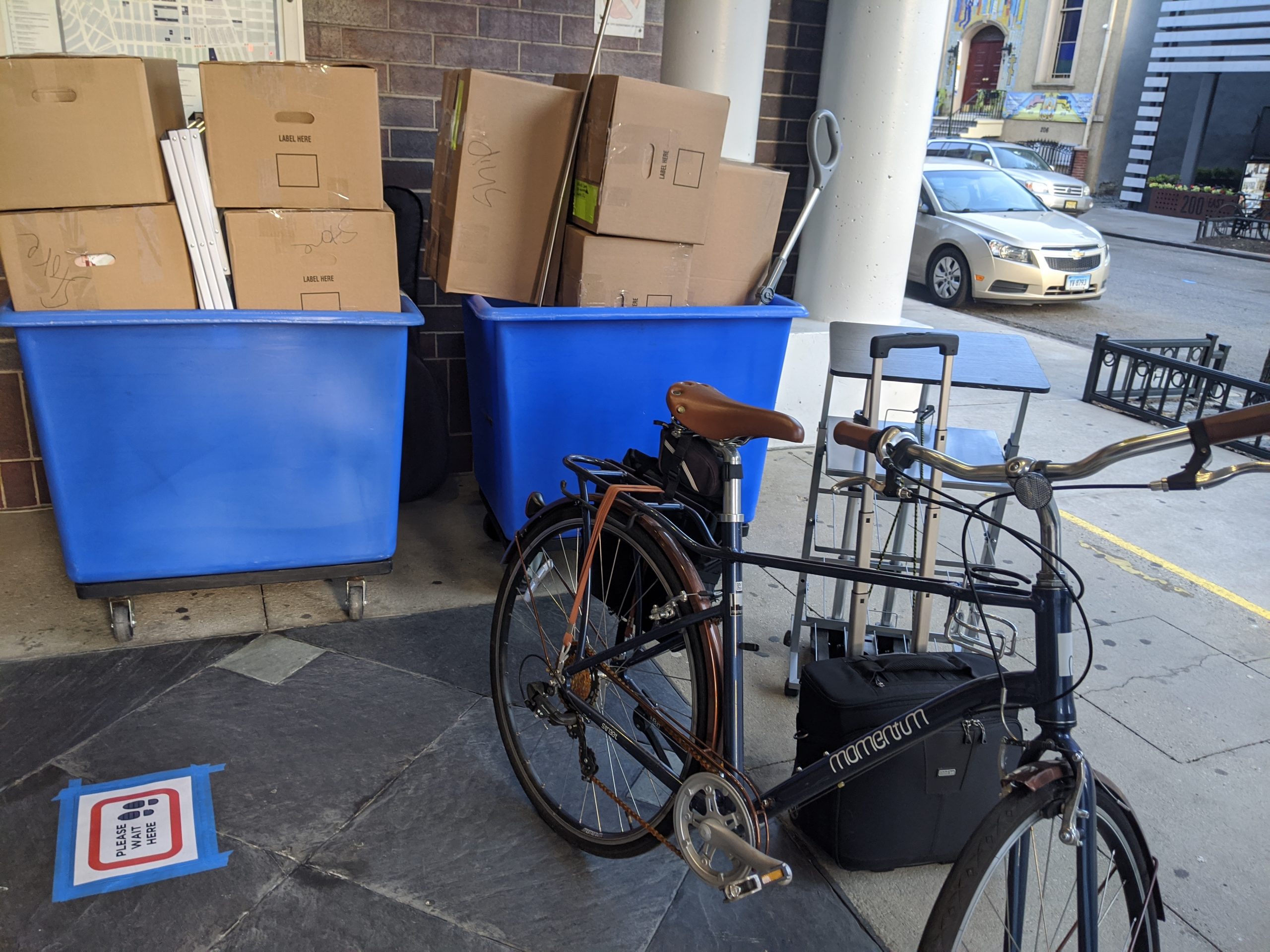 In late April, we heard news that NYU was opening back up in May for a couple of weeks so students could get their stuff. With the way New York was at that point, the highest deaths from Covid-19 in the U.S., people being urged to stay at home, with even the grocery store being a daunting place, and then in late May and early June, businesses getting broken into, people marching, the cops going nuts; it wasn’t a place people wanted to be. We had to leave the Union Square Staples early one night and keep someone’s guitar with us for a while to avoid the “anarchists”.  They looted several stores and Staples closed even earlier than usual at 5pm to avoid being raided. People didn’t want to risk traveling to NYC either and getting sick, so they needed us again. So we started up packing, moving, shipping and storing student’s stuff again.

During the lull in April, nobody was out on the street, except for the homeless and essential workers. That’s when I noticed how many people were in the street. I also read about how a lot of non-profits and shelter services had shuttered their doors which made it impossible for street people to find places to shower, go to the bathroom, get basic need type stuff etc.

Essential Services included moving so we were able to pack up a couple of students’ apartments when the future was unclear (during April). We had one apartment where I noticed this homeless couple taking shelter under some construction across the street.

The student’s mother and I spoke, and I ended up donating a bag of shirts and sweatshirts and essential toiletries and dry food to the couple and they shared it with another woman who was also taking shelter.

We could see everything out of the window from above as we packed that day and it made me teary. It made me want to help more people. This couple who had nothing, shared what we gave them with another person who was also in need. That really touched me.

In May, we did a lot more pack, move, ship and storing for people. I noticed the storage place a lot of people used was charging hidden fees. My partner and I have a storage unit  and decided we were going to use it to provide more affordable storage than our competitors through my partner’s production company, Salazar Productions. 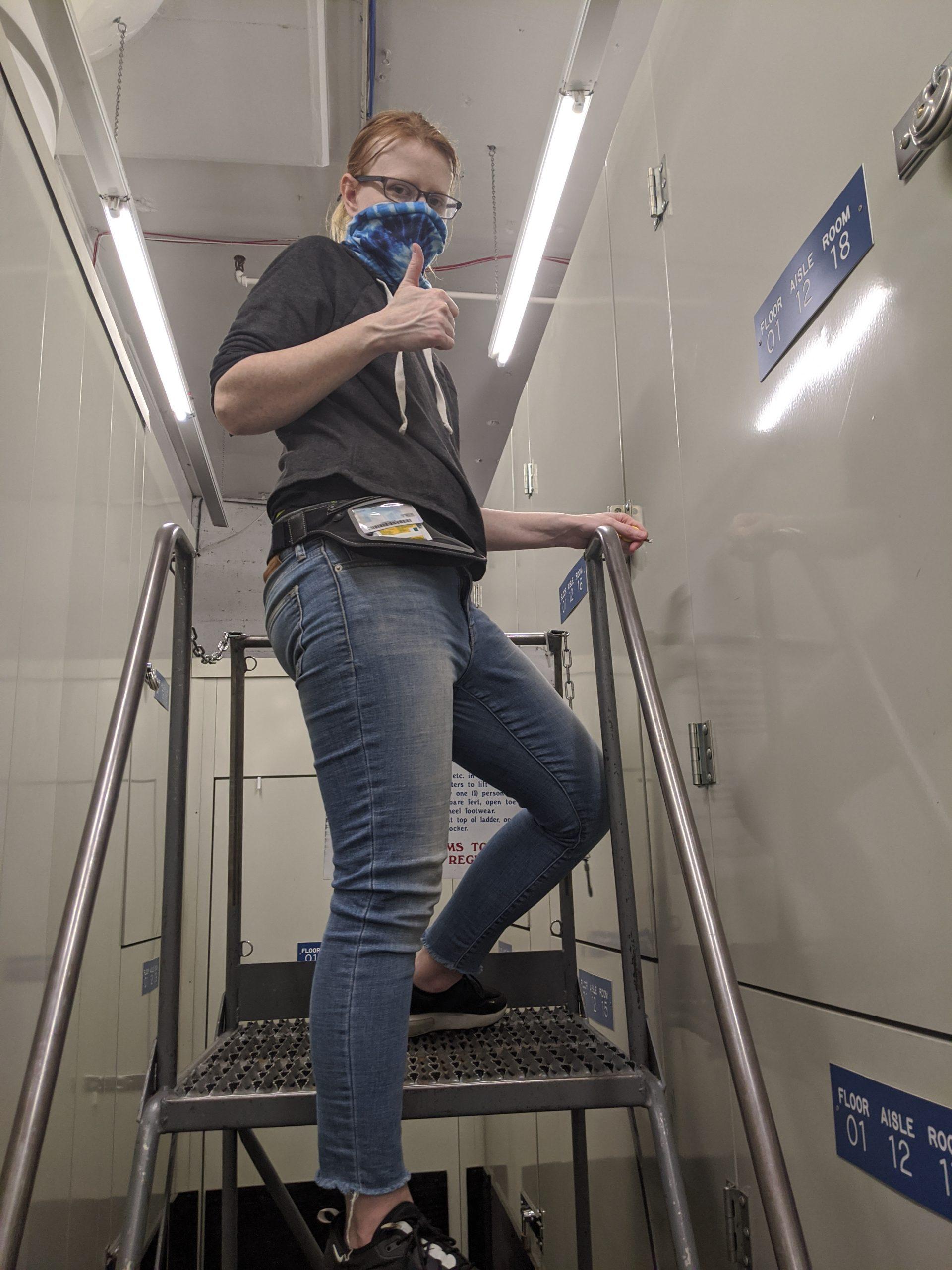 We aren’t sure what is going to happen in the fall, but are planning on providing move-in services where we get students stuff out of storage, whether it be with us or another company, wash linens and bedding and unpack and organize.

Things have slowed down for now, and since we already were doing clutter discarding for students living in apartments I wanted to extend what we are doing and provide organized packing and clutter pickup for people for a fee. They would also get a note and pictures from us that said where their stuff was donated so they would feel good about their old stuff helping an individual or organization. There are organizations that really help specific homeless like trans and lqbqt+ teens that I feel strongly about.

Goodwill isn’t necessarily the best option for donating, they are just the one people know about. I wanted to provide a service that is easy for people instead of having them shlep their stuff somewhere.

Through May we did a lot of dorm pack ups and this helped families wo lived out of town who couldn’t travel to NYC. We also helped our friends who were still waiting to receive their unemployment. We contracted a friend who is a rapper and sound engineer for podcasts help us with moving and a couple of actresses to help with packing. This was a way for them to make some money when there weren’t a lot of options out there and allow us as a business, help more people move their stuff in the short time frame NYU gave them.

We really have helped people from all sides and I want to do more by being a connector between people that have stuff to give away and the underserved community that need essentials like clothing, shoes, basic toiletries, socks. These are all things we take for granted. I have seen so many homeless people without shoes. It’s astounding! While also providing people an eco-friendly and easy way to get rid of their stuff.

We call ourselves Brains and Brawn on IG @brainsbrawnmovers – but moving is just the tip of the iceberg. I fell into this, and really love it and want to continue helping people.

Please message us on IG or email me at annieinthecity1@gmail.com if you need personal service packing and moving out of NYC , or just want us to pick up your gently used clothing, shoes, and toiletries and want to donate your stuff to a good cause. We will also be doing furniture pickups soon!