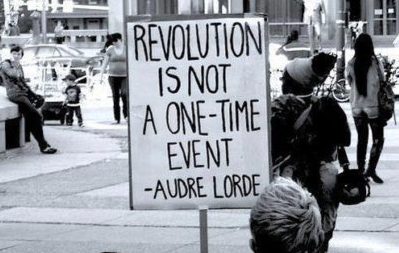 I’m prepping for a juicy, plus-sized revolution.
A breastfed mobilization against the dominant Cheeto patriarch.
I’m big mouthed and nasty.
I’m shaking my hips and crafty.
I’ve got endless maracas and psalms of my elders.
The crones are powering me robotically/ erotically.
We are desexing your smallness while we consecrate our darkness.

My swarm, my big nose, my baby-birthing body, my mouth that never stops, my right to choice and all that implies will scare you.
It’s me and my ancestors – ghostly rattling from dachau- that will haunt you, Bannon.
It’s my feminist sheros that will verbally eviscerate you, Trump.
It’s my open-minded opinions that will terrify you, Pence.

Just like when I was a woman-child and a hulking, hunching, insecure man came for me once – and he saw god in my reply – you will see god in our collective disavowal. I threw a tv at his head and I’ll throw one at you. An invisible tv that plays The Apprentice on loops and regurgitates all your lies through a truthometer.  I’ll throw hundreds. I’ll take all my sisters and all my brothers in all our yellows and browns and blacks with all our hooks and butts and words/ with nothing but time. We ain’t got nothing but time now. There are fires to burn, and that small white man who stepped to me on the school line and told me “Obama is the most racist president we ever had.” I will grab a crew of the baddest s&m girls I know and shove climate change down your scared little throat til you accept the irrefutable truth. I’ll lock you in a room with 5 of my friends who have been raped and let you tell them they can’t get an abortion.

Trumps men of ill refute can kiss my bombastic stretch marks, my gold Star of David, my progressive heart. You people I talk to in lines and elevators who are mourning and mobilizing – YOU are my peeps. The Mom who replied “I’m not into politics” needs to know her mere existence is political. Are you non white? A Jew? A Muslim? Trans? Queer? Disabled? A woman? You only exist in Trumps world to be mocked and reigned over. “Hope you feel better” said one. How are you NOT feeling bad, Elsa? You want your kids to be round up and branded? And the vegan activist who asked “Why are you all still posting about politics?” Do you not know that climate change and animal rights are political hot buttons and to ignore our upcoming cabinet is to seal the deal when it comes to increased levels of atmospheric carbon dioxide produced by the use of fossil fuels? Where’s the wake up button?

I’m an educated northern woman but god calls me to say fuck it during times like these. You don’t play with a Mom of 3 under 7. We know battle. We know snarl and hiss. We clean snot and piss. Nothing is gross that comes from beautiful. But nothing is beautiful when KelleyAnn Conwoman is rape-shaming other women and repeating devilish incantation. KelleyAnn, that gender traitor/ race baiter. That warped peroxide blonde with a blackened heart who bubbled and toiled spells on the American public – promising the poor their guns and gas – while quick stealing their health insurance and food stamps.

All this has gotten me thinking about my own privilege. Living paler than some, richer than many, free to uncover and mouth off. And that’s called soul diving, admission, dropping ego, being real. Something our elekkkt and his chosen ones wouldn’t know if it sat squat and opened on their faces. So you got booed by a handful of theater goers at Hamilton? Yea, that compares to decades of slavery. 70 year olds still partaking in their rumpspringa.

Don’t you know the more you try and repress our vote the more we will Gremlin-grow? We will moon cycle pirouettes around your archaic fascism.

So now we bathe in dandelion and clove. We wear evil eyes front to back. We talk to our vaginas, because they are so fucking pissed off and want to be heard. We write and we sing and we make phone calls and show up for elections. We repost and share and retweet and support The New York Times as Trump erroneously calls them “failing.” We don’t get intimidated by nasty trolls or uneducated haters. We create our own wall of the finest activists – interlocking so tight that even the darkest blast hate cannot get through.

Chloé Jo Davis is the Founder of GirlieGirlArmy.com. She’s an activist, writer, wife, and mother of 3 sons.