An expensive fur won’t get you past the velvet rope at Johnny Barounis’ East Side bars — in fact, it will stop you in your tracks, according to a new article in DNAinfo. Barounis, who owns establishments on the Upper East Side, the Lower East Side and in the East Village, is refusing to serve patrons who come in wearing pelts. The 51-year-old vegetarian has won many fans and a few critics with his anti-cruelty stance, which has vetted customers at his bars for more than ten years and also extends to bans on certain foods, like veal and foie gras.   “It has been something I have done my whole life,” said Barounis,  the 51-year-old Upper West Side resident whose bars include the Lower East Side’s Revision Bar and Gallery and the Back Room. “I was always anti-hunting, anti-fur.” As the evening crowd roll into his trendy establishments, doormen question the pelts of patrons for their authenticity and even inspect the furs if there is any doubt.  “We tell people you are welcome to come in, but the fur stays out” said Barounis, as he sat in  Revision, on Avenue B and 14th Street, that is furnished with recycled materials. 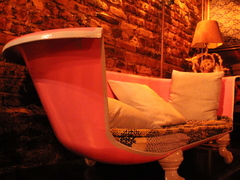 A bathtub at Revision Bar and Gallery in the East Village has been converted into a couch. (DNAinfo/Serena Solomon)

Animals that are raised for their fur are often kept in small spaces like battery hens and meet there end by suffocation, electrocution, gas and poison, according to People for the Ethical Treatment of Animal (PETA), of which Barounis is a member.  While many regular patrons are aware of the rule, some have been caught off guard. Last winter at the Back Room one woman became irate when she was denied entry due to her coat.
“She called the police and they almost locked her up for the false alarm,” Barounis said, who also owns the Auction House and Fetch on the Upper East Side.  Not only does the cruelty aspect to fur upset Barounis, but that the animal’s death is often worn as a status symbol only adds to the frustration. “I guess she felt entitled enough [to call the police] because she could not get into a bar with a fur coat,” he said, comparing it to “wearing a trophy.”

However, most patrons are graceful when their outfit is rejected. Another woman who also wanted to drink at the Back Room, a speakeasy with an unassuming entry at 102 Norfolk Street, simply took her fur coat off. “She rolled it up and stuck it in a dark corner in the alley,” said Barounis, adding that the woman fetched it after her night out. “She made no bones about it.” While Barounis sticks to his rule, he understands the conviction is a personal matter and is not interested in enforcing his views outside the walls of the bars he owns.“No radicalism here, there is no red paint, the fur thing is basically what I can do to help change some behavior,” he said.