$Cash$… Not For Clunkers, But For Clothing!

Pit Bulls get a lot of bad press – but a group of beautiful women is changing that image – one pin-up picture at a time! Pinups for Pitbulls,  an organization dedicated to raising awareness and funds for pit bulls, is in the process of launching its 2010 pinup calendar.   This is an organization close to GirlieGirl Army founder Chloe Jo’s heart, cuz she has two pit bull mutts of her own who couldn’t be more loving or delicious (not to mention, wonderful with cats and kids!)   Pinups for Pitbulls’ goal is to educate the public about the pit bull breed, remove the stigma associated with these dogs, and ultimately save the lives of abused and abandoned pit bulls throughout the United States. 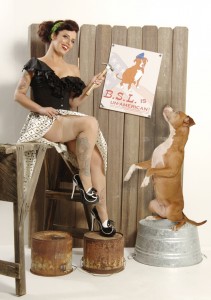 The true nature of the American Pit Bull Terrier is as mushy and gentle as it gets.. remember, Pit Bulls used to be one of America’s favorite breed of dogs.   Currently there is a Pit Bull overpopulation problem in the United States, because people buy instead of adopting, don’t spay/ neuter, and often if adopting are usually more attracted to the fuzzy, smaller dog in the corner kennel. Sadly, Shelter statistics estimate that more than 80% of Pit Bulls in shelters are euthanized, and typically only 1 in 600 Pit Bulls finds a loving home.     Did you know that over 800 dogs per day, per State are euthanized because folks buy instead of adopting?   It’s time to change all that!

The calendar, in its fourth year, highlights stories and images of 12 pit bull owning women and their four-legged friends.  Sales from the 2009 calendar raised almost $20,000 for bully-friendly rescues across the nation, doubling in funds raised and circulation from 2008. Pinups for Pitbulls sponsors individual pit bulls in need – covering their medical bills, transport, funding dog crates, food, and blankets. In 2010, the goal is to double the donations again and make it the best year ever, with your help!

Pinups for Pitbulls is now seeking models, makeup artists, and photographers for the 2010 calendar, as well as volunteers for events, sponsors, and advertisers. Visit www.pinupsforpitbulls.com for more information on submitting your images for the calendar, or to be featured in prints, web and merchandise year round! (The calendar submission deadline is September 25th, 2009.)   Now, be a darling for animals, and pass this blog on to all the dog lovers in your posse stat! :)

Pinups for Pitbulls was founded by model and bully breed advocate Deirdre ‘Little Darling’ Franklin in 2006. Little Darling and her team have been featured on NPR, Associated Press, Discovery Channel, CN8, Animal Planet, The Bark Magazine, Animal Sheltering Magazine, the Philly Daily News, The Philadelphia Inquirer, The Trentonian,The Baltimore Sun and many other publications worldwide. For more information and to see a list of rescues that have benefited from the organization’s efforts, please visit  www.pinupsforpitbulls.com. If you’re interested in interviewing Little Darling (and her two bully furkids) please email her at  littledarling@pinupsforpitbulls.com.