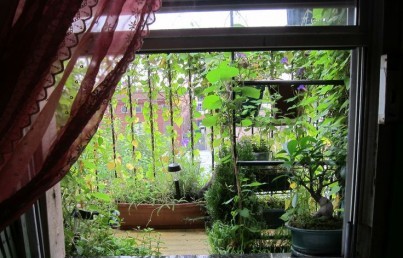 Why I Chose To Wean My Toddler: A Gentle Journey To Weaning

The 4th of GirlieGirlArmy’s 34 video series for About.com is here. We’ll be rolling out one episode a week for your viewing pleasure!

City living doesn’t have to be all environmental drain. “There’s no way I can be green because I live in the city and it’s a total toxic wasteland of smog and fast food.” That’s just not true. You can live green in the city. And, in fact, I know some people who are living greener in the city than some people who are living in the country and not living sustainably at all! Watch today’s episode to learn some easy and quick tips to greening up your City lifestyle;

Some easy simple tips to going green by living in the city is join a C.S.A., which is community-shared agriculture, which means that a local farmer or a farmer relatively close to the city, you pay a certain amount of money, and every week you get a certain amount of food. I have a C.S.A. that delivers to my apartment building weekly. It’s just a big share of delicious organic vegetables. You’re saving money, you’re thinking locally, and you’re acting community-minded. And that’s really the greenest way to possibly live.

Another thing is about reclaiming spaces that aren’t necessarily used, like a lot near your house, or using your fire escape to grow vegetables. It’s so simple, you wouldn’t believe, to just pot some sprouts, like I have potted sprouts on my windowsill, mint and oregano, and even growing simple things like a tomato plant.

These things are endlessly easy ways to go green and eat green in the city, especially when we’re thinking about plant-based eating, which is, of course, the only optimal way to be truly green, especially with climate change being the way it is and the fact that we are about to double our meat intake by 2050. Right now we’re at 11 billion animals a year. We are living far beyond the earth’s means. We are using up too much land, and there’s too much methane in our stratosphere right now. We need to focus on plant-based eating and taking it back to more simple, community- minded, locally produced vegetables and fruits.

Another tip to living green in the city is mass transit. Yep, you got it, not having a car. There’s no reason to really have a car in most cities. Take the train. Do some sharing of cars. I think that’s why things like Zipcars are so awesome because if you need to just go somewhere for an hour, you just rent a Zipcar. And yeah, you know, you’re still driving in a car, but you’re not contributing to a lifetime of mileage and all the gas on the road.

Another way to live green in the city is by composting. Well, you don’t have a big compost in your backyard? What’s wrong with you? Just kidding. I don’t have a compost in my house. I live in an apartment. I don’t have a terrace and I don’t have a fire escape. If you do, you can have little box compost machines, which are awesome and work incredibly well. But if not, all farmers’ markets for the most part or all C.S.A. shares have some sort of opportunity for you to bring your scraps to them, and they’ll happily compost them.

And what a lot of my friends do is they have a really large gallon size sort of Ziploc type situation or a big tub where they throw all their vegetable ends in or any food that doesn’t get eaten or any scraps in these, and they sort of pack them and leave them in the freezer. And then once a week, they throw them over to the farmers’ market and get their fruits and vegetables. It’s kind of an all-for-one, one-for-all move. So composting in the city is a fantastically easy endeavor, although it doesn’t seem so. Or you can just rescue a dog from the shelter and give them all your scraps (except onions!) like we do in my house.

ABOUT GGA FOR ABOUT;