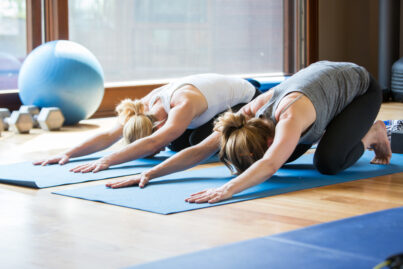 The mood could only be described as tense as the three of us walked across the pebbled pathway leading to the guest house in silence. As diehard Manhattanites, we do fear the outdoors and are always hypervigilant for signs of any type of wildlife, but tonight, we walked with purpose immune to the nature all around us.

Evening activity (the mystical aura photography) had just ended in the main house, and many guests still sat around the couch comparing and contrasting their colorful auras. (Think of these photos as selfies of your soul.)

Normally – as the three founders of Groundsea Fitness – we would stay and chat, but rumor had it that an article about our retreat was about to drop in our paper of record (The New York Post, if there is any doubt as to which paper I am referring to). We’d met the writer, she’d interviewed us and a handful of guests, and we even took part in a photo shoot (I regret this part).  The current retreat was going well, but we knew the article could make or break us as a company. We sat Indian style on one of the beds, hitting refresh over and over on every device like parents of first-time sleepaway campers … waiting.

“Uh-oh,” my partner/sister uttered. (Actually, she didn’t say uh-oh, but I don’t think her reaction is for print, so let’s just pretend it was uh-oh.)

“FAT CAMP FOR GIRLS WHO ARE ALREADY SKINNY..,” the headline blared.

We’re toast, my sister uttered (that’s verbatim).  We all agreed, and cringed as we read the story word for word. Yes, it was pithy and funny, but it wasn’t really describing the experience that we had curated. We envisioned a summer-camp style burning of our logo by the lake – as a way of saying a final goodbye to Groundsea.

We slept soundly despite the bad news.  After all, action-filled days that begin with three-hour hikes up Bear Mountain, through Flag Rock or across the Appalachian Trail, along with afternoon fitness (can’t forget your core!), massages and vinyasa flow yoga, can really tire a person out.

Around 6:30 AM, our third partner and childhood BFF announced: “Guys you’re not going to believe this.”

What? we asked, our words teeming with dread. “All of the July retreats are now full, and we have waiting lists for three of the four – plus our inbox is blowing up and our voice mail is also full.”

Turns out, everyone wants to go to Fat Camp for Girls Who Are Already Skinny.

We were dumbfounded, but maybe we shouldn’t have been. For better or worse, we all want to be members of this elite club, shares Harriet Brown, a professor of magazine journalism at S.I. Newhouse School of Public Communications at Syracuse University in Syracuse, NY, and the author of several books on food and body image including “Body of Truth,” “Brave Girl Eating,” and “Feed Me!”

“Our preference for and obsession with thinness grows out of a number of trends that came together around the turn of the 20th century, including the availability of food, a drop in manual labor, waves of immigrants who were considered less desirable, and a rise in medicalization,” she explains.

“If you look back over those last 120 years, you’ll notice that the pressure for women to be thin peaks during times when women are gaining more social power. So in the run-up to women’s suffrage, we had the flappers, who popularized an androgynous and slender body type. In the 1960s with ‘women’s lib’ and the pill, we had Twiggy. In the 1990s as women began to ascend the corporate ladders, we had Kate Moss and heroin chic. One of the major factors that perpetuates this obsession is advertising, which is based on creating and exacerbating our deepest anxieties about ourselves, anxieties that are then exploited to sell products,” she continues.

“Then there’s also the fact that the vast majority of medical research in this country is funded by industries that make money off weight loss, from pharmaceutical companies to bariatric surgeons to commercial entities like Weight Watchers.”

The bottom line, she says, “there are many threads that come together to create this obsession” and thus, everyone wants to go to fat camp for skinny girls.

In truth, Groundsea Fitness is so much more than this, and I imagine that (other than the Biggest Loser Ranch and Bikini Bootcamp) most wellness retreats are of a similar vein.  Most of the hundreds of guests who have crossed our doorsteps (many for second and third times) and drank our Kool-Aid (well, fire tonic, to be exact) are fit, but they are not coming to us to lose weight (if that happens as part of the detox process, so be it). Mainly they want to hit pause, take time for themselves and learn how to make healthier choices every day. Some are super fit marathoners, others have never hiked before. Some cook every night and follow all the cool food bloggers, while others do nothing of the sort. Many are vegan or want to be, but some are diehard carnivores. We’ve had socialites, celebrities, moms, daughters, sisters, influencers and journalists and even a handful of men and regardless of age, weight, social status, education and fitness level, everyone tends to bond (kind of like camp). There is a common denominator. Everyone loves talking about food, taking photos of food (well that’s probably a new thing) and making plans for eating food. For three to five days, our guests get to know each other without makeup, stick-straight hair, stilettos and any pretense whatsoever. As they hike and share snacks atop mountain peaks (and snacks are more than six almonds), they also talk about romantic relationships, work stress, work-life balance, loss and childrearing and pets, TV shows, books… you name it.

No camp experience is complete without counselors. Any former or current camper knows that counselors make or break your summer. We’ve got a giggling chef (who when not cooking, shopping, rolling vegetable sushi or making cashew milk from scratch, can be found binge watching Grey’s Anatomy), the world’s peppiest, but not annoying fitness director (a tough balance), a seriously zen yogi/reflexologist who is a pied piper of local massage therapists, a hard core hiking team who are prepared for everything—and of course a dream team of specialists. Instead of arts and crafts and boating, we’ve got acupuncture, dream interpretation, aura phototherapy and a cryo facialist.

The food is, of course, better than I remember having at my Wayne County camp.  There are three group meals a day (with cooking demos), and each ingredient is locally sourced, vegan and organic and looks so pretty that you feel bad when you devour it in less than 3 minutes.  I’m not kidding. I finish my carrot-tahini-sweet potato pancake breakfast in under two minutes and I don’t eat breakfast in the real world. The cuisine is predominantly vegan (although bone broth is an option around 4 PM). There is no alcohol or sugar (and even more amazing, no one cares or complains). We do offer bulletproof coffee in the AM, which means no withdrawal headaches for java junkies and this is a big plus according to guests who have been to other caffeine-free retreats.

The meals are balanced to sustain guests throughout the day and help their body detox. We don’t go by calories, but we do limit portion sizes, focus on colorful fruits and vegetables– and love anything in a mason jar.

So, if Groundsea is not fat camp for skinny girls, what is it?  It’s camp for adults – but instead of arts or sports, the theme here is health and wellness. And sticking with the camp thaw, and throwing it back to an old alma mater, Groundsea is truly a “world of our own…conceived with our love and our long-lasting pride” – and as such, it allows us all to be healthier regardless of weight or body image. If calling it Fat Camp for Skinny Girls encourages people to try it out, so be it.

Denise Mann is a freelance health writer in New York. Her articles regularly appear in WebMD, Healthday.com, Beautyinthebag.com and other consumer health portals. Mann was awarded the 2004 and 2011 journalistic Achievement Award from the American Society for Aesthetic Plastic Surgery. She was named the 2011 National Newsmaker of the Year by the Community Anti-Drug Coalitions of America. She has also been awarded the Arthritis Foundation’s Northeast Region Prize for Online Journalism, the Excellence in Women’s Health Research Journalism Award , the Gold Award for Best Service Journalism from the Magazine Association of the Southeast, a Bronze Award from The American Society of Healthcare Publication Editors for a cover story she wrote in Plastic Surgery Practice magazine, and an honorable mention in the  International Osteoporosis Foundation Journalism Awards. She was part of the writing team awarded a 2008 Sigma Delta Chi award for her part in a WebMD series on autism.  She lives with her husband, David, their miniature schnauzer, Perri Winkle Blu, and her Chihuahua rescue mix, Thomas Jo, and their two sons, Teddy and Evan. In her spare time, Mann is working on a fiction novel loosely based on her extended family.