Isn’t that what you hear time and time again?  Funny how the animal rights activists I know are the only people in my circle who DO charitable works in all sectors.  It seems you are either an activist at heart or not.  Anyway, back to caring about people. 60% of the world’s grain is fed to farmed animals while 925 million people do not have enough to eat.

Did you know that it takes 16 pounds of grain to produce just one edible pound of animal flesh? While we’re feeding the majority of our grain crops, along with our soy and corn crops, to animals on factory farms, millions of people around the world are starving to death. Seems wrong, doesn’t it? Being vegan doesn’t only save animals. With the amount of food and water that is wasted on animal agriculture while people starve to death or struggle to find clean water, it makes sense to stop eating animals—even the United Nations thinks so.

It’s a fact: If we stopped eating animals, we could easily feed everyone on the planet with healthy and affordable vegan foods.

On October 31, 2011, the world’s population hit 7 billion people. Our current food system is incapable of addressing the needs of so many, and it’s up to us to make a change in the way we eat. ﻿﻿﻿﻿ ﻿If you’d like to put an end to world hunger, environmental destruction, and cruelty to animals, do your part and pledge to go veg. 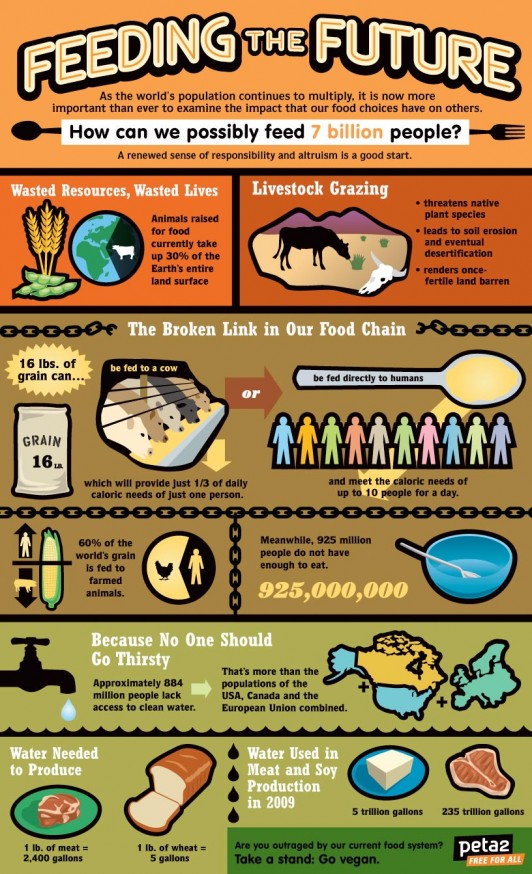