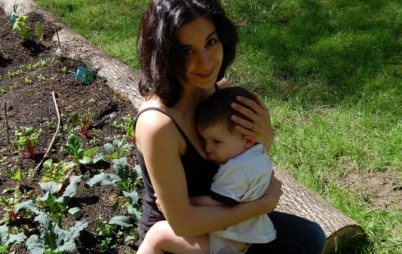 There is nothing more beautiful, bonding, or nutritious for your child than breastfeeding – that’s been proven by every Doctor, healer, and Mother on the goddesses earth.  But it doesn’t always come easily, in fact it usually doesn’t, which is why we are so grateful to Joanna Steven for writing the new e-book; The Milky Way: The Ultimate Guide to Breastfeeding on a Raw Food Diet.  Follow her tips to be sure you and your babe feel healthy, strong and confident breastfeeding on a healthy, clean diet.  Here are Joanna’s tips on increasing production. We’ve lived these tips personally and can attest to their working.

Before getting on to the topic of galactogogues (ingredients which naturally stimulate breast milk production), I would like to make one thing clear: one of the very best strategies to improve milk supply is to breastfeed. The more your baby latches on and sucks on the nipple, the more signals your brain will get to ramp up production.

It’s all about supply and demand – if the body feels there is no demand, the production will go down. It really is infuriating to hear about mothers who were told to put their baby on formula because he or she was supposedly not getting enough. Often, babies will suck a lot not out of hunger, but out of a need for comfort. Mistaking this need for the need for food and introducing formula ends up decreasing breastmilk production, therefore actually causing a need for milk which wasn’t there in the first place! A good way to gauge the sufficiency of breastmilk production is to simply see whether the child is thriving or not. A baby growing normally and gaining enough weight is most likely getting enough food.

Franklin, for example, was always in the upper 90th percentile. At 17 months, he was already wearing clothing size 3T. But as a baby, he needed the breast a lot. A lot. Sometimes, I felt like he was breastfeeding 24/7, even though sometimes my breasts were all emptied out. He was just a fussy infant who needed a lot of comfort, a lot of skin-to-skin contact, and a lot of holding. Giving him formula would not have changed that in the least, because his need for food was satisfied.

But, thinking that perhaps my breastmilk was insufficient, I started taking many of the galactogogues mentioned below. As a result, I ended up with too much breastmilk, and such a forceful letdown that for a few months, I had to breastfeed Franklin lying on my back and supporting his little head, otherwise he would sometimes choke on the milk. If you are told that your milk is not sufficient, contact a La Leche League leader, or get a second opinion from a pediatrician who is supportive of breastfeeding.

Once your supply is well established, you may want to cut back on the galactogogues to see if your body is able to produce enough milk on its own. All these products are relatively easy to find. Mountain Rose Herbs has very fresh products at low prices, but their shipping rates are a little on the high side – placing a big order with them every once in a while is a good way to always be stocked up without spending too much.

Nettle leaf infusion: Nettles are a wonderful source of nutrition. Loaded with many minerals including a lot of iron, nettle infusions are deeply nourishing. I drank nettle infusions almost daily, as did my friends Debbie Pierce and Courtney Clay, who have contributed recipes for this book. Debbie once shared that she sometimes mixed nettles and chamomile together so the chamomile would go to her breastmilk and help her son sleep. I tried it with Franklin, and it really did seem to work! Infusions are made by pouring 4 cups of boiled water on a cup of dried herbs. Steep until cool.

Shatavari root: Shatavari, a type of asparagus (which, by the way, also increases milk production), has been used in Ayurvedic tradition for a variety of issues including low milk production. It is a great source of nutrition for women, and its name actually means “woman of a hundred husbands” because of its balancing and energizing properties – on many levels! You can add shatavari root powder to smoothies and nut milks, where it will go unnoticed. I like to add it sesame milk, which is very high in calcium.

Fenugreek and fennel/anise seeds: Fenugreek has a maple like flavor, and is easy to use to make tea. Simply steep a half teaspoon of it in hot water, and let cool a little. Enjoy as you would any tea. Fenugreek can lower blood pressure, so increase the dosage progressively to see how you react to it, not exceeding a teaspoon a day. Fennel and anise seeds can be used the same way by steeping 1 to 2 teaspoons in a cup of hot water until cool enough to drink. This infusion is also soothing for upset stomachs, and is thought to help with symptoms of colic.

Oats: During cold Iowa winters, I added cooked oats to my diet as I felt they were nourishing and kept my milk supply up in times of stress. Oats can be consumed raw, just look for really raw oats. You can soak them in water overnight to make raw oatmeal, or add a few tablespoons to smoothies.

Fennel: Fennel, a delicious bulby vegetable with a licorice taste, is wonderful sliced thin in salads or added to green juices. When I discovered that Trader Joe’s was carrying very low-priced fennel in its stores, I started juicing it almost daily.

Quinoa and red millet: In Nutrition and Physical Degeneration, Weston Price reported that women in some traditional tribes consumed quinoa and red millet to increase their milk production. I enjoyed cooked quinoa often, as it is an inexpensive yet filling and nutritious grain. Quinoa can be eaten in a raw, sprouted form but it is tricky to sprout. I ate it cooked, by boiling it for 20 minutes at low heat with twice the quantity of water and a pinch of Celtic sea salt.

Many breastfeeding moms have wondered why a big Standard American Diet meal stimulates their breastmilk production and gives them an abundant supply, but a raw food meal won’t. It’s actually not that simple. A SAD meal could lead to low supply too, and a raw food meal could lead to an abundant supply. What is most likely happening is that the SAD meal was high in calories, fat and many nutrients (as well as toxins – which makes it an undesirable meal), and the raw meal was high in fiber and water, but not very nutrient dense.

But most raw foods have been known to increase breast milk, if they are eaten in varied and relatively healthy quantities. For example, foods such as leafy greens, nuts and seeds, garlic, ginger, turmeric, and nutritional yeast, all often used in a raw diet, are lactogenic. Eat them regularly (except for ginger after birth if there was significant blood loss), and be sure to get more calories than you did when you were pregnant. Some women can manage to breastfeed without as much food, but if you feel that your supply could be increased, try eating more.

Joanna Steven is the author of Well Rounded – The Ultimate Guide to a Successful Raw Food Pregnancy, The Milky Way – The Ultimate Guide to Breastfeeding on the Raw Food Diet, and more. Passionate about raising healthy, happy children on the most nutritious high raw diet, she regularly shares recipes, nutritional advice, and food diaries, and writes about her parenting experience through the Tera Warner blog, her own blog, and the Raw Mom Club where she interacts daily with other multi-tasking moms! The Milky Way: The Ultimate Guide to Breastfeeding on a Raw Food Diet is designed to make sure you and your babe feel healthy, strong and confident with your diet and lifestyle choices.