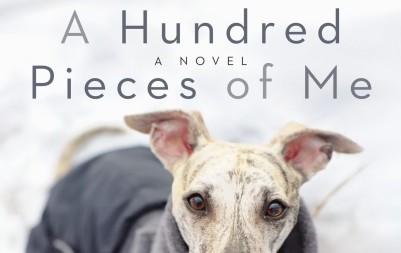 The Most Progressive School You’ve Never Heard Of: The Solutionary School

National bestselling author of Lost Dogs and Lonely Hearts, Lucy Dillon, returns with a delightful, compulsively readable novel about the unexpected gift of certainty—A HUNDRED PIECES OF ME. Emotionally unwell from her recent divorce, Gina Bellamy needs a fresh start.  In order to do this, she decides to get rid of all of her possessions, except for the one hundred things that mean the absolute most to her. This novel will be magic to anyone who has experienced a break up or divorce, or someone yearning to simplify an overstimulated life.

As Gina lets go of the past, she starts to come to terms with everything that has happened in her life and discovers that moving forward is the only option.  And when she makes that choice, that’s when the magic happens.

The flat was completely crammed with cardboard boxes. Crammed, from floor to ceiling.

The movers had left a narrow corridor through the spare room so she could get inside, and they’d lined two walls of her bedroom with wardrobe crates. The sitting room was now two-thirds filled, the white walls lost behind brown ones. She had to turn sideways to get into the kitchen-diner. Her possessions loomed over her every way she looked.

Gina was stunned by the unexpected invasion. It felt crushing, claustrophobic. Before her shock could tip over into tears, she started pushing the boxes away from the big white wall, where her special painting was to go. She needed to be able to see that wall, even if every other one was blocked.

Her muscles ached as she dragged the heavy boxes around but she forced herself on. I’ve got to start sorting right now, she told herself, or I’ll never be able to sit down.

Gina’s previous vision of sitting in the empty flat, languidly considering one item at a time from a single box evaporated. She tipped four boxes of bedding into the corner of her bedroom, and wrote “KEEP,” “SELL,” “GIVE AWAY,” “DUMP” on the empty cases in big letters, lining them up in the limited space in front of the sofa. Then she took a deep breath and pulled the brown tape off the nearest box.

Everything was bubble-wrapped and at first Gina couldn’t work out what the first item was, but as she unrolled the plastic, she saw it was an antique blue glass vase. She had to think twice about where it had come from, then remembered that she’d bought it when she was at university.

I loved this, she thought, surprised. Where’s it been?

A memory slipped into the forefront of her mind, of stopping outside the window of a junk shop in Oxford . . . fifteen years ago now? It had been drizzling, she’d been late for a lecture, but something about the curved shape had leaped out of the cluttered display, a suspended raindrop of bright cobalt blue in the middle of a load of tatty brass and china. Gina could picture it in her rooms at college, on the window overlooking a courtyard, but she struggled to remember where it had been in Dryden Road: in the landing alcove with some dried lavender in it. There, but invisible, just filling a space.

She sat back on her heels, feeling the weight of the glass. The vase had cost twenty-five pounds—a fortune in her student days—and had always been full of striped tulips from the market, left until they decayed in that pretentious student style, falling in tissue thinness onto the stone ledge of her windowsill. Kit had started it: he’d brought her flowers on his first visit, and she’d been unable to bring herself to throw them out. And after someone had said, “Oh, you’re the girl who always has flowers!” Gina had made a point of keeping the vase full because she wanted to be the Girl Who Always Had Flowers.

At least I don’t do that anymore, she thought, with a twinge of embarrassment at how much she’d wanted people to like her at university. She wasn’t in touch with a single one of them now.

Gina started to put the vase into the GIVE AWAY box; over the years she’d collected lots of different vases, for lilies, hyacinths, roses. She didn’t need one that reminded her of Kit, and of all the expectations she’d had at university of where her life would be by now. All her life, she realized, she’d been creating this paper trail of possessions, hoping that they’d keep her attached to her own memories, but now she’d found out they didn’t. The last years meant nothing. They were gone. All the photo albums in the world wouldn’t keep them real.

But as she held it, she stopped seeing those things and instead saw a vase. A rather nice vase that made Gina think that, actually, she’d had a bit of an eye for quality even as a student. Its bold sculptural shape had got lost in Dryden Road’s collage of color and detail, but it was perfect for this flat. The white background reframed it: it was still a beautiful frozen raindrop of glass, bright cobalt blue, ready for flowers to fill it.

Gina edged around the boxes until she was in front of the big picture window, and placed the vase squarely in the center of the windowsill, where the sun would shine through it as it had done at college, revealing the murky wet shapes of the flower stems, rigid below the papery petals.

She stood for a moment, trying to catch the slippery emotions swirling in her chest. Then a cloud moved outside and the last light of the day deepened the blue of the glass. As it glowed against the blank white sill, something twitched inside her, a memory nudging its way back to the surface. Not of an event but of a feeling, the same bittersweet fizz she’d felt when she’d unpacked her belongings in her university room, waiting for the happiest days of her life to roar around the corner, despite her secret worry that maybe she’d already had them, anticipation sharpened with a lick of fear. Was that a memory? Was it just the same feeling in a different place? Because her life was starting again now too?

Gina took a deep breath. She wasn’t going to keep the vase because it reminded her of college or because a visitor might be impressed with her good taste. She was keeping it because she liked it. And when she looked at it, it made her happy. It caught the light, even on a gray day. It was beautiful.

She hadn’t bought it for her student rooms. She’d bought it fifteen years ago—for this flat.

The blue glass vase glowed in the weak, wintry sunshine, and the white flat didn’t look quite so white anymore. Gina stood for a long minute, letting nothing into her head except the liquid swoop and the deep, jewel-like color.

Then, with a more confident hand, she reached into the box for the next ball of bubble-wrap.

Lucy Dillon lives in Herefordshire, England with her pair of basset hounds, Bonham and Violet.  Visit her online at www.facebook.com/LucyDillonBooks.