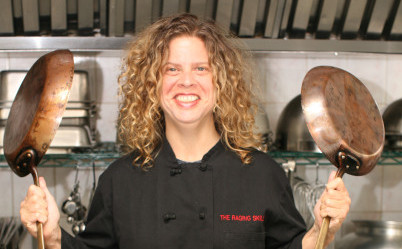 Why These People Are Happier Than You Are

Once in a while a book hits our bedstand that makes the world a lighter, happier place. The Raging Skillet is one of those books. Written by longtime GirlieGirl Army contributor, Rossi (yep, one name/ lot’s of blonde curls.) Rossi is the owner and executive chef of The Raging Skillet, described as a “rebel anti-caterer” by the New York Times. Rossi has written for many publications, including Bust, the Daily News, the New York Post, the Huffington Post, Time Out New York, and McSweeney’s.

When their self-proclaimed “mental yentl” high-school-aged, punk, runaway daughter is found hosting a Jersey Shore hotel party, Rossi’s parents feel they have no other choice: they ship her off to live with a Chasidic rabbi in Crown Heights, Brooklyn. Within the confines of this restrictive culture, Rossi’s big city dreams take root. Once she makes her way to Manhattan, Rossi’s passion for cooking, which first began as a revolt against the microwave, becomes her life mission. The Raging Skillet is one woman’s story of cooking her way through some of the most unlikely kitchens in New York City—at a “beach” in Tribeca, an East Village supper club, and a makeshift grill at ground zero in the days immediately following 9/11. Forever writing her own rules, Rossi ends up becoming the owner of one of the most sought-after catering companies in the city. This heartfelt, gritty, and hilarious memoir shows us how the creativity of the kitchen allows us to give a nod to where we come from, while simultaneously expressing everything that we are. 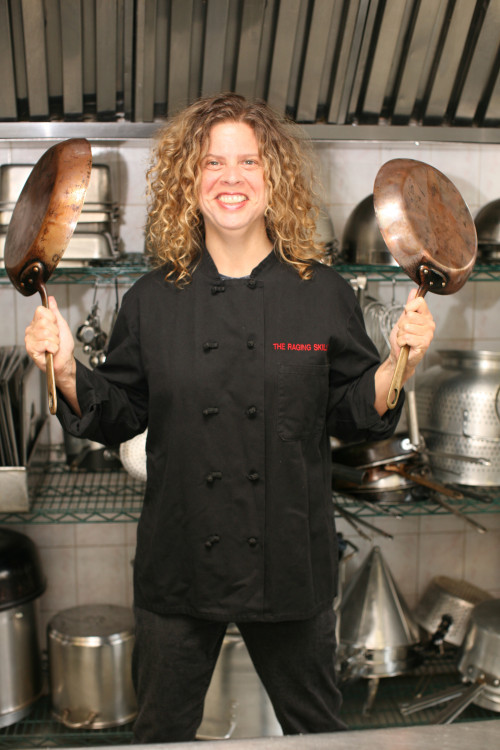 The recipes (heads up) are far from vegan, most of them not the healthiest choices, but they are really a side note to the story and more amusing (pizza bagels ala tween) than the real gourmet fare Rossi usually offers up (yes, her catering company does vegan beautifully!) This is the perfect, funny, funny book to scoop up and read in the park as the warm weather hits.

“Well-rounded, redolent of salty sweat, sweet love, and the joy of food… A humorous and witty chronicle of a woman’s pulling-herself-up-by-her-bootstraps rise through the culinary ranks.”

“A fun ride through the wild life of Chef Rossi. Her memoir is sweet, salty, and, ultimately, delicious.”

“No chef memoir has ever made me both laugh and cry, but this one did. I fell in love with Chef Rossi, her Orthodox Jewish Jersey family, and her unpretentious, creative way with food. Badass, heartfelt, hilarious.”

—Nigella Lawson, author of How to Eat

“I laughed out loud reading The Raging Skillet. An awesome, thoughtful book full of characters I feel like I’ve always known.”

“Rossi’s the kind of woman whose heart, humor, and badassery make me a little weak in the knees, and that’s before we get to her soulful, unpretentious, joyful take on food. If Janis Joplin and Julia Child had had a baby who got raised by Orthodox Jews, that baby might have turned out a little like Rossi.”