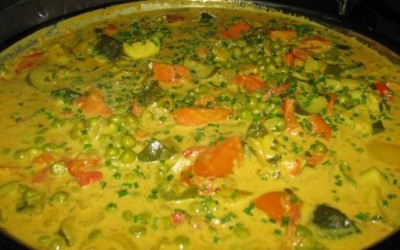 A Monthly post by Chef Rossi, chef, caterer, and artist where she will makes us kvell with her new column exclusively for us called “Kvetching and Kooking;”

A good curry can be as rich and as complex as a symphony (or a Patti Smith concert, more my kinda symphony) and as sexy and exciting as a new romance. Curry can take on the flavor of Thailand, Jamaica, India and even China. Sounds like my kinda party!   When I know I’m in the throws of tasting a great curry, is when I feel more then one dimension of flavor in my mouth; first of course the curry, but then the lemongrass, the coconut, the ginger and wow, someone bring this girl a cold shower! 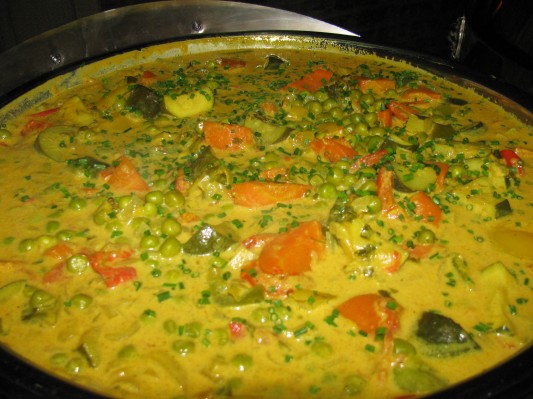 As a chef, I figured out pretty darn early, how to get to that first dimension of flavor;  just sauté a bunch of veges and throw in some dry curry powder. Hey not a bad start, but about as thrilling as ramen noodle mix. As the years went on, I started to add the layers, not just to the curry of course my dears, but rock and roll cowgirls never grow old, do we?   What follows is a killer-icious vegan curry recipe that should put some rock on your socks.

Then drop in some chopped ginger or galangal (doesn’t matter how you chop it you’re gonna strain out later), some chopped lemongrass, a few pieces of cardamom and a hot chili pepper.

Bring the coconut to a boil, then lower to a simmer and let simmer for about an hour, then strain and put aside.

Meanwhile back at the ranch, sauté a heaping handful of onion, when it starts to soften, throw in a plop of minced garlic, three heaping handfuls of either baby carrots, diced carrot, or carrots cut however you like them.

Throw in one cauliflower cut into bite size flowerets, two red bell peppers cut up and three cut up zucchinis and cook the whole shebang for five minutes.

At this point throw in a heaping handful of good dry curry, or red curry paste and a plop of ground cumin and salt and pepper to taste.

Stir and shimmy then throw in your super gorgeous coconut milk.

Cook the whole shebang until your veges are nice and soft.

In the end throw in a bag of defrosted frozen peas.

I sometimes throw in, a dash of siracha pepper sauce if I want it spicier.

A handful of chopped tomatoes or a can of crushed tomato.

Sometimes I roast the carrots separately and throw in for more flavor.

Other variations that I love; throw in a handful of raisins or sliced dry apricots.

In the end you’re good to go or throw in a handful of chopped cilantro.

This is gorgeous over basmati or jasmine rice or white rice, but I once served it with cous cous and nobody arrested me, well for the cooking anyway.    And hey, you can also forget the rice and throw in a few diced potatoes instead then it’s a whole meal on it’s own!

Rossi aka Chef Rossi   Rossi- yes she only has one name- has been a writer for many publications, such as “The Daily News,” “Time Out New York” and “Mcsweeney’s” to name a few. She is the writer of the “Eat Me” column for “Bust” magazine and hosts her own hit radio show on WOMR and WFMR in Cape Cod called “Bite This”, now going into its 8th season.   She has been featured on “The Food Network” and “NPR” and has just completed her first edible memoir “The Devil and Mrs. Goldstein!”   As the owner and executive chef of “The Raging Skillet” a cutting-edge catering company known for breaking any and all rules, she has earned a reputation as the one to call when it’s time to do something different.   www.rossirant.com www.theragingskillet.com