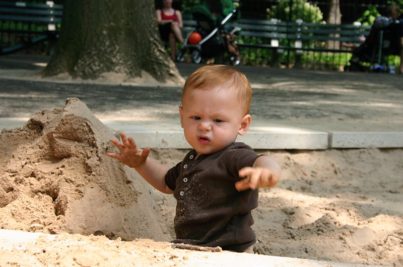 I also have yet to meet someone who isn’t pleasantly surprised by my son’s behavior, his willingness to try new foods, his vast knowledge of music, and more. I strive to do it without rewards & punishments, time-outs, and other mainstream child rearing methods, and I feel it is working out great for us. When I do use these methods, usually because I’m running on empty and my patience is low, I always regret it, and notice that it generally backfires on me later on.

Raising him this way isn’t without challenges, but is bringing up a toddler ever easy? Children, by default, will try to test limits and assert their place in the world, but there is definitely a way to keep the bliss in your relationship with your child. Yes, despite everything toddlers represent, it is possible to spend the best part of your day with them and experience profound joy that is difficult to find anywhere else. The rewards are endless.

One sure fire way to suck out all the joy out of parenting is by butting head with your toddler in dead end situations. The solution? Avoid being in a place where your toddler is acting out because of something you can easily do something about. Just don’t go there. Keep the following points in mind, and tantrums are sure to diminish drastically.

1) Your child is tired

Your neighbors partied all night, and you couldn’t sleep. You banged on their door asking them to stop, and they ignored you. You called the cops, who did nothing. You finally fall asleep at 3 am, sleep about 4 hours, and then need to start your day. Are you a happy camper? Of course not. Heck, for some people, even a full night of sleep isn’t enough, they’ll warn you that they will “bite your head off if you show up before their first cup of coffee,” or they’ll claim they’re not “a morning person.” If adults can’t behave when they’re tired, how can we expect a child to do any better when their nervous system is even less mature than ours? Let’s be realistic here.

What to do? I’m a big proponent of letting a child sleep through the night in his own time. I didn’t do any sleep training with Franklin except for no nursing until it’s 5 am after he turned 2. Still, Franklin and I are rested, even though he still needed a nap at around 1 pm until he turned 3. What do we do? First, I don’t let his brain get frazzled by electronics and similar stimulating activities. If I let him watch a show on TV, it’s either in the morning (I let him watch French cartoons on my tablet and quiz him on the words to teach him French), or in the evening if it’s something calm like Mister Roger’s Neighborhood, and we never exceed half an hour per day. Artificial lights disrupt hormones, and mess with normal sleep patterns.

Also, he sleeps in his own bed because having someone near him wakes him up more often than he needs to (hopefully the next baby will be the co-sleeping type!)… But if he needs me near him, I’ll sleep in his bed. While he was still breastfeeding, I would always nurse him in the morning to see if he’d fall asleep again. What works for your child may be different, but if it works for you, and your child is rested, go for it!

If your child is tired, and throwing tantrums because of it, disciplining will be ineffective. Your child cannot control himself when he’s exhausted.

2) Your child is hungry

Watch our for The Hungry Toddler. He can be quite a terrifying little monster. Adults are no different. If I’m hungry, my blood sugar drops, I feel like crap, and I become terribly cranky. Children need to eat more often than adults, and if you’re hungry, then your child is probably feeling ever worse. I nursed Franklin in the morning, then gave him finger food while I prepared breakfast. He likes a lot of different foods, so he’ll eat apples and cucumbers while I make green juice, or eat part of the thawed fruits I’ll be using in green smoothies.

Make sure that your child doesn’t have food allergies. One of the teachers at Franklin’s future preschool mentioned that once her daughter went gluten free, she went from being a crabby, rebellious child, to a pleasant, happy one. Franklin thrives on a high protein, high fat diet, and does quite poorly on a high sugar, high carb diet. Experiment and see what works for you, but I’ve noticed that Franklin’s preferred diet is best for most of the children I know.

3) Your child is in pain

Pain can be quite scary for a child. They may not realize it will go away, and often they don’t associate their behavior with their pain. One day, Franklin was being particularly difficult, and I was very close to losing my patience. Then my husband asked him if something was hurting, and he said yes, and pointed to his lower jaw. Lo and behold, he was teething a molar. My husband gave him some ibuprofen, and he was a happy little boy after that.

If your child is in pain, try to distract him or ease the pain. Disciplining will be ineffective, and is sure to make you feel quite guilty once you realize your child was just suffering, not being purposely annoying to you.

Children, especially toddlers, are little bundles of energy. They need to release it, and one of the best environments for that is the great outdoors. I make it a point to take Franklin to the park every day, unless it’s particularly miserable out. If you’re not keen on being outside and can’t bring yourself to do it anyway, consider enrolling your child in a Forest School, or a Farm School, or a school that lets them spend a lot of time outside rain or shine. If your child is full of pent up energy, disciplining will not help, and will only make the situation unpleasant for the both of you. Make sure your child has fun outside every day.

And as a corollary… TV, video games, etc., are very tiring to a little one’s brain, they can make it more difficult to fall asleep, and the artificial light messes with hormones. I mentioned this a little in the first part of this article. Try to limit them as much as you can. If you can avoid them altogether, more power to you, but if you find it to be quite difficult, then at least reserve them for the morning hours, and don’t watch anything violent. This may seem like common sense, but even the most child friendly shows can be a bad idea. Franklin enjoys watching books on the library’s computer, and one day, he watched “The Berenstein Bears Get Into a Fight.” After that, every once in a while, he’d kick, punch, and do other undesirable things while saying “I want to fight! Like the Berenstein Bears!”

5) Your child needs to reconnect

Children cannot stand being disconnected from you. This is why when you lock horns with your child, and need some time alone, he will not let you get away so easily. He’s not trying to bug you, and make you mad. He’s trying to restore broken bonds. Reconnecting when you’re at the end of your rope isn’t easy, so try to avoid being in this situation in the first place. Spend a lot of quality time with your child. Franklin and I borrow 15+ books from the library every week, and read them together every day. He liked to nurse for quite a while when he would wake up (I guess he must see sleep as a disconnection from me), and while it used to annoy me, I now choose to see it as an easy way to reconnect with him while also lying down and getting a break. When he was little and cranky, I would put on upbeat music, pick him up, and dance with him while doing all kinds of things to make him laugh, like bounce him to the beat of the music. I give him my entire attention, without phone, Internet, etc., for several hours a day.

If you child is not feeling connected to you, he is sure to act up. Disciplining will only break the bonds further, and will not work. Reconnect with your child, then explain calmly that his behavior was not acceptable, and that he should use his words to ask for your attention.

Preventing tantrums is not something that will work every time, because toddlers can easily get frustrated by their inability to express themselves. But, they can be avoided quite often by ensuring that your toddler is rested, well fed, get adequate amounts of exercise, and is feeling loved. You will then be this much closer to parenting blissfully!