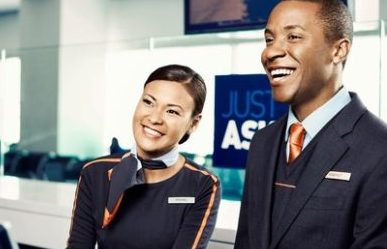 Are You Blocking Your Money Flow?

When you introduce new uniforms for more than 11,000 crewmembers, what do you do with all of that old fabric? This was the question at hand when JetBlue introduced the first new uniforms in the airline’s 14 year history. JetBlue and its sustainability team came up with the perfect answer – Keep it out of landfills. In fact, JetBlue recently announced a donation of more than 18.5 tons of used uniforms, clothing and fabric to several non-profit partners including Planet Aid, a nonprofit organization that collects and recycles worn clothing and shoes.  Planet Aid will sell the clothing with the proceeds supporting health, agricultural, educational, and environmental programs in Africa, Asia, the Caribbean and Latin America. The collection and organization was coordinated by Loomstate, an end-to-end sustainable fashion house high on our must-have list of green brands.

JetBlue’s uniform recycling program included collecting old uniforms from over 60 cities and approximately eight pieces of clothing per uniformed crewmember. Rather than simply throwing away the collected fabric, JetBlue decided to give new life to the more than 37,000 pounds of material by donating it to charities and people in need. Now, donated clothing items will live on and can now be worn again.

Recycling in any way, shape or (uni)form from JetBlue on Vimeo.

Donated items were directed to eight donation centers and regulated uniform items, such as pilot shirts, that required shredding were sent to special facilities in Arizona or Massachusetts to be turned into more fabric for use in couch and pillow cushions.  Of the 37,000 pounds of collected textile, approximately 11,538 pounds were donated as clothing and 25,462 pounds were shredded and donated as fabric, resulting in zero pounds going to landfill.

Now about that carbon offsetting…