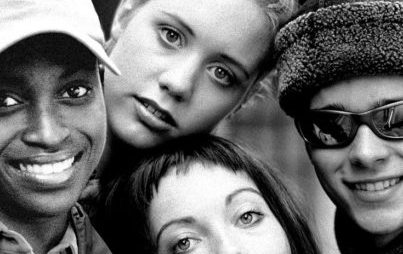 In my mid 20s, I did a stint working for the Metro Washington, DC chapter of PFLAG (Parents, Families, and Friends of Lesbians and Gays), where in addition to carrying out everyday office tasks and keeping board minutes, I fielded emails and phone calls from families whose kids have come out, along with kids who were dreading coming out and needed support. For adults, I had lots of resources to offer, relatively speaking (though nothing near what’s available today). When it came to young people, there was almost nothing. And what there was didn’t speak to kids in their language and skirted issues like sexual development.

So I took it upon myself to try and fill this gap. I wrote a book and found a reputable publisher willing to take a chance on it. Just a few months ago, I turned in the manuscript revision for what will be the third edition of GLBTQ: The Survival Guide for Gay, Lesbian, Bisexual, Transgender, and Questioning Teens, first published in 2001.

Over the years, I’ve gotten a lot of great feedback on the book. Some have generously called it groundbreaking. But what I’ve only recently realized is that where I’ve been credited with breaking ground for queer kids, they’ve actually blazed a trail for me, and changed my life in ways I’d never have predicted.

Today’s LGBTQ youth are more likely than ever to identify not just as gay, lesbian, bisexual, or even trans, but are exploring and claiming identities way beyond these letters. Genderqueer, nonbinary, pansexual…and on.

They’ve leapfrogged past most adult role models and are now modeling something different for all of us-an incredible willingness to be open to myriad possibilities of their own identities. Beautiful and unique ways of being that express who they are, with the commonality that we are all human. They’re busting past distinctions and groupings that limit us to categories.

They are teaching us.

But for their boldness and visibility many pay a steep price. Many of the gains we’ve enjoyed as queer adults haven’t trickled down to kids, and lots of LGBTQ youth, their daily lives largely hidden by brick walls, are experiencing some of the worst of the backlash.

The fact is, most schools are not safe spaces for LGBTQ youth.

According to researchers from GLSEN (Gay, Lesbian, Straight Education Network), the nation’s leading organization for safe schools, “Schools nationwide are hostile environments for a distressing number of LGBTQ students…” Data from GLSEN’s latest “National School Climate Survey” (from a pool of 10,528 students across the country), shows just how significant and pervasive challenges are at school for LGBTQ youth.

And this behavior is in many cases supported, either explicitly or implicitly, by school staff and policies:

• 81.6% of students reported that their school engaged in LGBT-related discriminatory policies or practices
• 57.6% of students who were harassed or assaulted at school did not report the incident to school staff, most often because they doubted that effective intervention would occur, or that the situation would become worse.

How Queer Kids Changed My Life

I get it. School wasn’t safe for me, either. I was well aware of same-sex attractions as young as elementary school, but growing up in rural Pennsylvania, where the question wasn’t whether you went to church but which one, and where one learned to “love the sinner, hate the sin,” I knew it wasn’t okay to be me.

Back then, I did my best to get along. I dated who I was supposed to date. And it wasn’t that I wasn’t attracted to guys, but every male I dated, from high school boys to men, I never met one who I felt would let me really be me. Classic male and female roles held no appeal to me. I wasn’t that girl.

As I was leaving college, I came out as gay. That had to be what I was. I definitely wasn’t straight, and the lesbians I met hated “bisexual” girls as much as the folks I knew growing up hated the sinners.

So I picked women, exclusively, and told the world.

Then, of course, I met a lot of women who were also uncomfortable with the full me.

Finally, a few years ago, I fell in love with my best friend. A straight girl. And I was forced to confront those rigid boundaries I’d created about my identity as gay.

And it was queer kids I looked to as role models. This next generation of incredible youth I was writing about with their “f*** labels” attitudes and their bravery.

And in them I found the courage to go for it. To let myself fall for a woman who’d never been attracted to other women. To drop everything I’d learned from those college girls and all the women after who said a real lesbian wouldn’t touch a woman who dated men with a 10-foot…you know.

It was queer kids who inspired me to rethink my own beliefs about who I really am. Who encouraged me to confront the question of what’s more important to me-living according to a rigid idea, or the opportunity to experience love and humanity in a way that required me to become a bigger person?

And that changed everything.

Now, a strongly defined sexuality is less important to my identity than doing my best to be a compassionate and open-hearted person. Without a doubt, distinctions like L, G, B, T, Q, and beyond still serve a very valid purpose, both to individuals and the movement, and I’m all for everyone choosing what feels right for them in that regard, from one year, month, or minute to the next.

For me, I still have a fondness for, but am less identified with my lesbian label. I see myself more as someone who does her best to act in congruence with all of my values, which are linked by compassion. (I always joke that I’m waiting for someone to make a t-shirt that reads: “Queer, vegan, and spiritual as hell!”)

And that’s why I think we should all care about what’s happening to LGBTQ youth.

The thing is, there’s a compassion crossover. When we truly live heart open, we don’t just do it with regard for some-for the issues that we feel affect us personally. The reality is, it’s all personal.

And that’s why my safe schools work for kids embraces but also looks beyond “LGBTQ” to consider the world we can build-starting at the community level-when we push back all of the boundaries and preconceptions instilled in us by blind acceptance of popular culture.

My work doesn’t just paint queer kids as victims that need saving, but as powerful change agents. It values LGBTQ youth for what they teach us all, and seeks to create a space where through the lens of their diverse experiences, we can all learn to understand and love ourselves more, as I have.

Right now I’m working on a book that helps educators create spaces where LGBTQ youth can thrive, but that also looks at how honoring LGBTQ youth can help communities become safer spaces for us all. But the book is just the start. This needs to be a movement, and I ask you to join me in it.

This is a very different way of approaching safe schools than the tradition route, and to be the vision bearer on this I need to get out in front of people. My friends have talked me into launching an Indiegogo campaign. The more money I raise, the more schools I can visit. The more folks I can get on board. The more partnerships I can build.

The truth is, most people don’t care about LGBTQ kids. At least not enough to do anything to support them.

I want to change this. I want to help folks see not only how overlooked these kids are and what tremendous challenges they face, but also the incredible gift that just being who they are without shame gives us all. How recognizing this gift can transform communities into more compassion spaces for us all.

Because we, ourselves, are only as big as the spaces we allow others to inhabit.

Kelly Madrone is an award-winning author and a freelance writer specializing in animal welfare and LGBTQ youth. Learn more about her safe schools campaign here: