We are always the first to tell fellow breastfeeding mothers that dairy is a feminist issue and that dairy is the cruelest of all animal biproducts. Dairy means babies stolen from their mothers, cows hooked up to “rape racks” and kept regularly impregnated to keep producing breast milk, painful mastitis, and agonizing loss.

Even the “best-cared for cows on the planet.” That’s the claim made by Daisy Farms, a milk supplier to Daisy Brand sour cream and cottage cheese—products that can be found in supermarkets all over the country. Do conditions on the farm really live up to that claim? 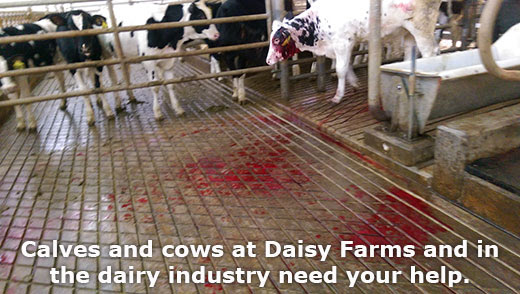 Not according to two eyewitnesses who worked at the farm.

A PETA exposé reveals the hell on Earth experienced by cows in the dairy industry.

Cows were forced to stand and lie in their own waste. They were kicked, whipped, and jabbed with pens and a knife—even while they were in labor. Two cows with severe lacerations on their tails were not treated by a veterinarian, to the knowledge of PETA’s observer, including one cow whose wound was seen bleeding more than three weeks after her tail had been torn in two.

Some sick cows were finally shot, while others were killed by injections to induce a heart attack while they were fully conscious.

As you can see in the video footage, workers pulled calves out of their mothers’ wombs, causing the cows to cry out and defecate. Several newborn calves drowned when workers shoved tubes down their throats and forced milk into their lungs instead of their stomachs. The survivors had their heads smeared with a caustic paste to destroy their sensitive horn tissue—without any anesthetics.

The only way to ensure that no animals suffer for your sour cream, cheese, milk, ice cream, coffee creamer, and yogurt is to go vegan. We can help you every step of the way with recipes and tips to make the transition an easy one, like the obviously easy choice to buy vegan sour cream, vegan cheese, vegan milk, and the rest (all easily available in any Whole Foods or health food store.) Won’t you make this simple choice for animals? It’s a no-brainer for your health too, as dairy consumption closely linked to cancer and obesity.

Back to Daisy Farms: Sign this petition and pledge to avoid all animal-derived foods—no matter what feel-good language and photographs a company may use to try to entice you. Wherever profits are the bottom line, corners are cut. And animals pay the price every time.

Together, we can make a difference for cows suffering in the dairy industry. All you have to do is take a moment to take action today. When you know better, you can do better. Start with swapping out your coffee creamer with a coconut or almond or soy based creamer this morning.