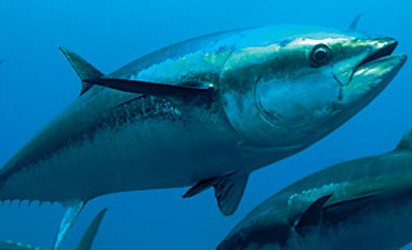 When a single bluefin tuna can legally sell for as much as $20,000, it’s no surprise that a market has developed to decimate that fish.

In fact all three of the world’s bluefin populations — Atlantic, Pacific and southern — are struggling to recover from decades of overfishing. And no wonder: Up to 90 percent of Pacific bluefin are caught before they’re even old enough to reproduce.

The demand for luxury sushi  has taken fish consumption to new heights. International treaties that are supposed to keep fishing sustainable have failed to protect the public interest in preserving healthy oceans. And meeting behind closed doors, international negotiators have consistently caved to moneyed interests. Bluefin tuna have been decimated as a result in the Atlantic, Pacific and southern oceans. Not to mention, fish is no longer a health food. After Fukishiyama, fish are consistently tested as having through the roof mercury levels – and extremely high rates of sea lice (think about that before your next California roll.)

This fall NYC Council Member Alan Maisel introduced a bill to ban the sale of bluefin tuna in NYC by adding it to the list of prohibited animals like rhinoceroses and tigers. To make this law, the city council must now hold a hearing on the bill.

The Center For Bioligical Diversity is asking us to ask the Chair of the Consumer Affairs Committee to do better, by saying “it’s your duty to hold a hearing on this bill. A New York City ban that’s consumer driven and facilitated by strong political leadership would show the world that it’s not OK to have bluefin tuna on our plates. ”

Take action by signing this petition today — urge the city’s Chair of Consumer Affairs to hold this hearing so we can get bluefin out of our markets and restaurants.