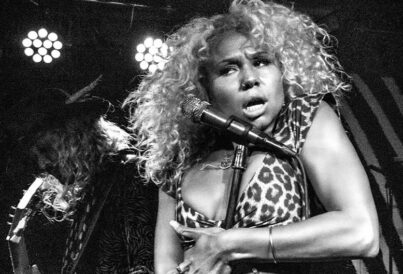 6 Fiercely Fabulous Vegan Metallic Pieces To Get You Through Winter

I’m in a dark car driving to Pittsburgh from NYC with my husband and 2 friends. It’s a cool 6.5 hours if you don’t stop. I am in pretty much head to toe leopard. Leopard sweatpants,  an over sized different leopard print sweatshirt, huge corduroy leopard tote (I look at the print like it’s a solid), tan Carhart beanie, and all black Doc Martens… and right now I feel sexy.

Frankly put: ? Leopard is my pussy fix in fashion ?

People are used to seeing me on stage wearing next to nothing in 5 inch heels, leotard, hair out and wild. As a performer I have always felt that it’s my responsibility to be as open and honest as possible. That spans every facet of my experience of being a woman. I dig into my self, sexually, emotionally, allowing people to see me get excited, be tough, cry, angry, coy, heartbroken, writhe and touch myself. Nothing is off limits.

Specifically for my band the Liza Colby Sound I pulled inspiration from early Tina Turner and Iggy Pop because both were a spectacle. A sensory explosion of sexual energy, killer outfits but most importantly they pushed the envelope.

There has always been a common thread, pun intended, between Fashion and Sexuality, and I am a sucker for both. Toss me that spool and let’s go to town. Imagine that you are holding the end of the thread while you throw it to me and let’s say that arc is the spectrum. That spectrum is our playing field. Everything exists here and we can choose where and what we want to explore.

I love how an outfit or piece of clothing can shape your attitude. Similar to how good sex can give you a boost of serotonin. Use the two together and you have a stellar life cocktail.

Yet I digress – I have never worn this outfit before but when I looked in the mirror I was stoked. I love leopard. Always have, always will. As a weird NYC real-estate agent once said to me “leopard is my favorite color”. Leopard, that’s a sexy animal. What makes it sexy? Confidence? Power? All of it? Maybe it’s that leopard makes me feel. I have always thought it’s better to love or dislike something than be indifferent. Without that how do you evolve? Today I am feeling comfortable, cool and proud of myself for trying something new. That’s the kinda high I am always chasing.

Maybe we should all take a page out of the book of Cher, Prince, Bowie, or Marlon Brando. Try something new in the bedroom and on from your closet with the intention of giving yourself the permission to feel.  You choose, you’re in control.

No leopards were harmed in the writing of this article.

The Liza Colby Sound, out of NYC, is known for an aesthetic that harnesses the grit of garage rock, the anthemic power of classic arena rock, the sweat-soaked salvation of a soul revue, and the sneering defiance of punk rock. Part shaman, part seductress, Liza Colby was born to earn the Queen Of Rock N’ Roll mantle. Her music is for sinful Saturday nights, and redemptive Sunday mornings. It’s heartbreak music; it’s music of sexual liberation; it’s music for when it matters most. Liza’s vocals are boldly vulnerable, surrounded and supported by a freight train of power: Charly Roth (drums), Alec Morton (bass), and Jay Shepard (guitar), shaking the rafters and rattling your soul. This past year has been a watershed one for the high-octane rock quartet, seeing the band taking its incendiary live show throughout the U.S., Japan, and Europe. The Liza Colby Sound’s opening salvo to 2019 was the classic “Thunder Rolling” to the critically acclaimed debut full-length record Object To Impossible Destination.  Imagine Led Zeppelin at Madison Square Garden meets James Brown at the Apollo. Picture Tina Turner prowling the stage like Iggy Pop with vocals that conjure Aretha Franklin and Humble Pie’s Steve Marriott. Hyperbolic? Nah, come to a show! You can see them next at Coney Island Baby opening for Jesse Malin.