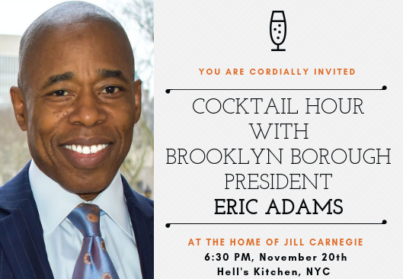 Pssst – you’re invited to a very intimate cocktail event with an exciting NYC Mayoral candidate! Attendance is capped at 25 people, so RSVP right away to secure your reservation… the GirlieGirlArmy.com team will be there co-hosting and representing!

Brooklyn Borough President Eric Adams has launched his campaign to run for Mayor – and we need him more than ever. In the wake of the, some feel, largely ineffective and corrupt reign of Mayor de Blasio, BP Adams’ firm stance on anti-corruption and transparency is refreshing and necessary to get NYC running as powerfully as it should be during this critical time in our country.

As NYS Senator, NYPD Captain, and as Brooklyn Borough President, Eric Adams has demonstrated his ability to build and lead coalitions with emphasis on community rather than special interests. He has a strong record on women’s rights, gun control, and animal welfare. As icing on the (vegan) cake, Adams has also used his personal journey to health to catapult multiple public health initiatives; processed meat has been removed from school lunches throughout Brooklyn, and many plant-based/vegan challenges have been launched city-wide in order that ALL New Yorkers have the best chance at a healthful and powerful life.

He also co-founded 100 Blacks in Law Enforcement Who Care as a result of his both his negative experience with NYPD and his positive experience serving as an NYPD officer during a time of great reform for the force. As NYS Senator (20th district), Adams formed coalitions opposing the “stop and frisk” policy and supports sensible gun control. His ability to reach a unique cross-section of New Yorkers due to the combination of his 22-year NYPD career and his work as an unapologetic progressive is phenomenal. He is also decidedly anti-corruption on every level – a welcome change in the wake of how we’ve seeing many handle their time in office.

Join host Jill Carnegie at her Hell’s Kitchen home to meet BP Eric Adams, support his crucial campaign, and enjoy yummy bites from Plates by Terri. The words above are from the host and not necessarily representative of those involved in Eric Adams’ campaign. 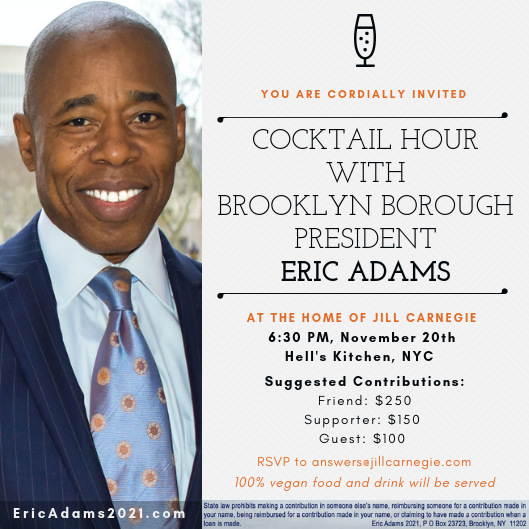 More info on the candidate: EricAdams2021.com