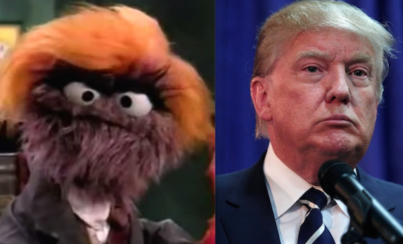 Despite bringing back Winston Churchill’s bust to the White House, Donald Trump seems to hate the arts. We say despite, because as Winston Churchill said; “The arts are essen­tial to any com­plete national life. The State owes it to itself to sus­tain and encour­age them….Ill fares the race which fails to salute the arts with the rev­er­ence and delight which are their due.” It’s been said that estimates are showing it will cost more to keep Melania in NYC per year than it will to fund the National Endowment For The Arts, which Trump wants to defund. So why does he hate Sesame Street so much? Perhaps the vindictive Trump can’t get over when Sesame Street made fun of Trump 10 years ago as a trash-hoarding puppet?

​​Donald Trump’s team is now planning to privatize and slash funding for the Corporation for Public Broadcasting (CPB), a primary funder of PBS. CPB calls the proposal “devastating.”  PBS Kids includes so many great shows, like Daniel Tiger’s Neighborhood, Thomas and Friends, Dinosaur Train and Sesame Street. PBS Kids and other public media reach 68% of all kids age two to eight. These shows are especially important for low-income and underserved children who do not attend pre-school.  PBS funding is a minuscule fraction of the federal budget.  We should be expanding our investments in early childhood education, not cutting proven supports for our littlest learners.

Donald Trump can’t make these cuts unless Congress agrees. Let’s make sure they hear from millions of parents and others who know the value of PBS and CPB. Please sign this petition, share this, and help ParentsTogether Action, spread the word.

**UPDATE: 100,000 people have also signed this petition by Facebook Messenger. Let’s keep it growing and send Congress a message they can’t miss!**