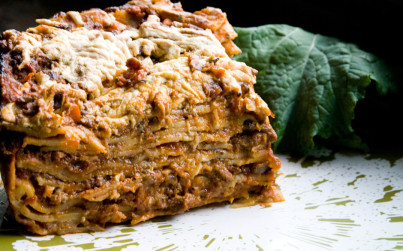 Casting Eco-Teens For The Adventure Of A Lifetime

When I first heard about and saw pictures of Del Posto’s 100-layer lasagna, I knew I had to have it. Er, you know, a vegan version of it, at least.

The basic premise is that you’re deconstructing the dish to its most basic, succulent elements—the ‘cheese,’ the sauce, the protein, and the pasta —and then just building it up as much as you can, until you’ve got a towering construction of Italian mastery that would be sure to tick off at least one of Garfield’s nine lives upon mere sight. That cat….

{Editors Note: Should you ever find yourself in NYC, Del Posto has the most incredible vegan tasting menu – just ask for it in advance – it’s so gourmet and romantic, it hurts.)

This is less of a straight recipe, more of a cooking road map.

Frist, the pasta. Fresh pasta is kind of a must with this as you need it to be really thin to get a lot of layers in there. Fret not, though! We’ve been making World Foodie Guide’s fresh eggless pasta recipe for years now, and it’s honestly hard for me to buy boxed dried pasta now. It’s seriously so so good. And she’s got a great write up of the whole process for the uninitiated. Go by her recipe and then set the resulting ball of dough aside, covered in a bowl.

On to the protein! We’ve been loving making our own seitan lately, using Terry Hope Romero’s recipe in her cookbook, Viva Vegan!, but Post Punk Kitchen has a great recipe for it too. You can also buy about 16 ounces of the pre-packaged stuff at your local grocer’s. Once we had the seitan made, we simply chopped it to a fine, ground-beef-like texture, and browned it with a little olive oil in a skillet. Then set aside.

To the sauce! This is important. You can use store-bought sauce, but it’s highly recommended that you make your own. Especially if you’re talking to any of my very Italian in-laws. We actually ADORE the marinara my father-in-law, Joe, makes. Luck would have it, he passed the recipe on to me. It is as follows:

So, basically, add all of your vegetables to a large pot with 2 tablespoons or so of warmed olive oil, tossing to coat. Throw in your crushed pepper and about a half-teaspoon of salt and simmer covered for about five minutes. Now add your crushed tomatoes and your tomato paste. Fill the tomato paste cans with water or broth, adding a total of 6 of those cans worth of liquid to the pot. Bring the heat up to medium, add all of the spices, and stir. If you like, you can add a cup or half-cup of red wine to mix at this point. Cook everything covered on medium-low heat, stirring and checking the taste after an hour, at which point you can add more spices if needed. Cook for another three or so hours covered, stirring from time to time. Store whatever you don’t use frozen forevs.

Now, the ‘cheese’! For this, we lean on the mozzarella-style Daiya, but, rather than layer it in straight, we simmered some almond milk stovetop, adding in a generous portion (nearly the whole bag) along with some ground white pepper, nutritional yeats, salt, and some smoked paprika, tasting as we went until we had a nice-tasting ‘cheese’ and letting it reduce down it’s not too liquidy.

Once you’ve got all that ready to go, you just start rolling out sheets of pasta as thin as you can get them, laying your first sheet on a baking dish with a spoonful of sauce underneath it. Rolling sheets out as you go, just start stacking it all up, alternating with pasta, meat, sauce, ‘cheese,’ and repeat. Until you feel you can go on no longer, friend. Carefully bake at 350ºF covered for 45 minutes or so, then uncovered to crisp the top for 15 minutes or so.

Via Troy & Katie of raven + crow studio – a Brooklyn-born, Los-Angeles-based design studio that specializes in not being jerks.