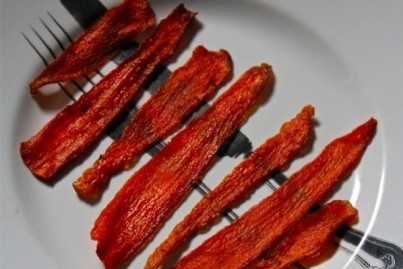 Win The Perfect Vegan Eco-Friendly Holiday Heels – Plus $40 Off Any OlsenHaus Shoes!

Vegans have been making “bacon” from everything from beets to coconut for years, but every once in awhile it’s fun to try a new take on this old favorite. Back in 2010, the folks over at Geeksystem introduced the internet to a guy named Kent Brewster and his clever trick for turning carrots into vegan friendly strips of crispy bacon using a deep fryer. I bookmarked it in my head as a cool idea to try later, but I didn’t return to it until a few weeks ago when I was having brunch at MOB in Brooklyn and noticed they had added the infamous carrot bacon to their menu. They served theirs as a side that you could add to your grits and vegan sausage bowl or tofu scramble, but my mind was already dreaming up how to use these smoky, crispy curls in sandwiches, salads, and soups before we’d even left the restaurant. I scribbled down ideas for dishes like carrot carbonara and carrot bacon wrapped asparagus in my notebook, and went home with a mission.

(The Inspiration – MOB’s Carrot Bacon made in a deep fryer)

Sadly though, when we got home and it came time to make our own, the idea of deep frying carrots didn’t really appeal to me. Their approach also didn’t address the necessary “smokiness” that is hands-down my favorite part of any vegan bacon. So I did a little research and found this feature on the best way to bake bacon. There was some trial and error in the early batches of carrot bacon. Followed by a hazardous adventure through a Polar Vortex snow storm for more carrots, but in the end we cracked the code of crispy oven-baked carrot bacon. Baked carrot bacon doesn’t curl up like its deep-fried peers, but gets a nice crispiness and keeps that smoky flavor.

Slice carrots into thin strips using either a mandolin or food processor to keep them uniform.

In a small bowl, whisk together broth, Braggs, olive oil, liquid smoke, and smoked paprika. Then, in a shallow dish, toss sliced carrots with broth combination until carrots are completely coated.

Arrange carrot slices on a foil-wrapped baking sheet so that they don’t overlap. Put in oven and bake for 7 minutes. Pull baking sheet from the oven and flip carrots. Put baking sheet in the oven to bake for another 7-8 minutes. It might take more or less time depending on how thick or thin you sliced your carrots.

You’ll know your carrot bacon is done when the edges are crispy and the center of each slice looks dry.

Move carrot bacon to a plate with a paper towel to soak up any extra oil. Salt and pepper to taste.

Let cool to room temperature before crumbling over a salad or putting in a sandwich. Store in an airtight container in the fridge.

via Dan and Annie Shannon, the duo behind MeetTheShannons.com. They are the authors of Betty Goes Vegan: 500 Classic Recipes for the Modern Family

. You need to own this book, plain and simple (click image below to order).