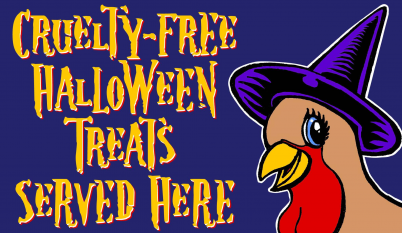 Marla Rose, also known as the Vegan Feminist Agitator, is a writer, activist, event organizer and mother living in the Chicago area; she and her husband are excited to have recently re-launched Veganstreet.com after a long hiatus and their maiden Halloween post inspired us to share!

The idea behind Humane Halloween is this: To share graphics people could download and print out with a compassionate message for Halloween where a vegan candy can be attached, and also posters people can put on their doors or windows to designate their house as being one that gives out cruelty-free treats. 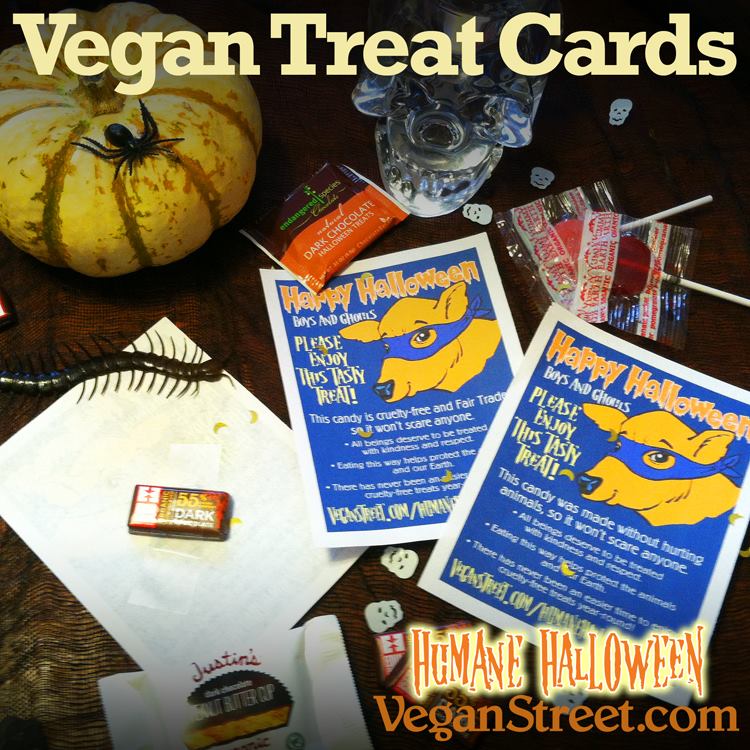 “I was inspired years ago by Global Exchange, which had a program called Reverse Trick-or-Treat, where kids could go door-to-door on Halloween and give a Fair Trade chocolate candy to the neighbors who give them treats. The candy was attached to an informational card that described the importance of supporting Fair Trade (as opposed to child slave trade) cocoa. My son and I have done Reverse Trick-or-Treat for years but last year, we decided to modify it to include a message of compassion to all animals so I had my handy-dandy in-house designer (a.k.a., my husband) come up with some images. 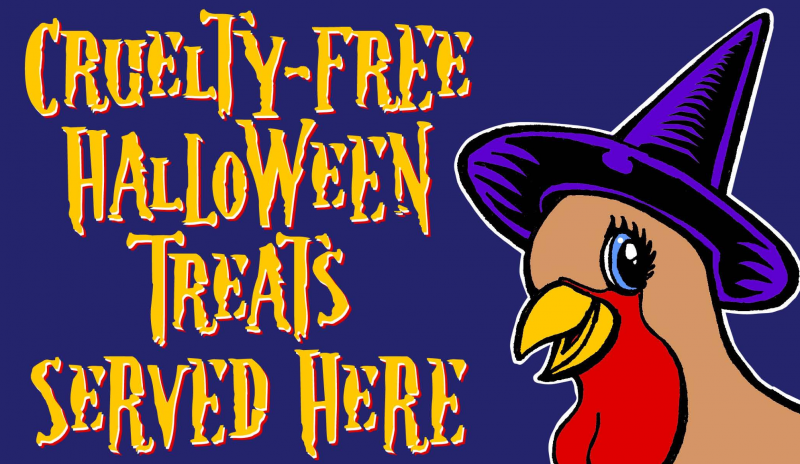 To me, I love the idea of Humane Halloween because not only are we spreading the message of compassionate living, but children can be the messengers, which is very moving and empowering. So often with vegan advocacy, we’re asking people to do something they don’t want to do: give up eating animals, stop going to the circus, wearing animal skins, etc. This is all very important, of course, but with Humane Halloween, we can spread the message in a fun and welcoming way that people enjoy. Who doesn’t like a free treat? The idea, too, is that this has lots of room to grow into a movement. Participating families will also have their Humane Halloween signs, and in the future, I hope we’ll have the technology so people can look for cruelty-free treats for Halloween in their neighborhoods. If we can encourage participation, this has real potential for reaching the masses. Also, keep in mind that you can leave these print out cards in cafés, bookstores and so on in the time before Halloween. Restaurants with vegan treats can also promote them with the Humane Halloween sign on a window. It’s friendly, positive, fun outreach with a gentle message.”

What could be an easier way to say “A Kind Family Lives Here” and inspire open, young, and compassionate minds?

You can download all these images (and more) on the Humane Halloween Page.