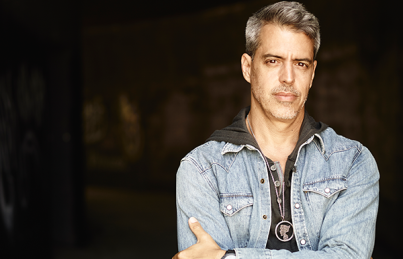 Our friend, world-renowned street artist Justin Bua brings art to life with his groundbreaking, adrenaline-charged competition series “Street Art Throwdown,”which premiered last night, Tuesday, February 3 at 9 PM ET/PT. Justin BUA serves as host, co-judge and executive producer on the show, which pits 10 of the country’s most promising artists against one another. The series tests not only their physical stamina, but also pushes their artistic skills to the limit in hopes of jumpstarting their career with a $100,000 grand prize. “Street Art Throwdown” is shot at some of the most iconic Los Angeles locations as young, passionate hopefuls strive to bring their vision to life and showcase their work to the world. Furiously scaling walls, climbing fences and navigating underground tunnels, these artists must have the talent, style and hustle to battle it out to the end. “Street Art Throwdown” is part of Oxygen’s rebrand, with the network’s new look and tagline, “very real, targeting young, modern women.”

Groundbreaking in his field, BUA is internationally known for his best-selling collection of fine art posters—The DJ being one of the most popular prints of all time.

Born in 1968 in NYC’s untamed Upper West Side and raised between Manhattan and East Flatbush, Brooklyn, BUA was fascinated by the raw, visceral street life of the city. He attended the Fiorello H. LaGuardia High School of Music and Performing Arts and complemented his education on the streets by writing graffiti and performing worldwide with breakdancing crews. BUA went on to the Art Center College of Design in Pasadena, California where he earned a B.F.A. and taught figure drawing at the University of Southern California for ten years.

Starting in the world of commercial art, BUA designed and illustrated myriad projects, from skateboards and CD covers to advertising campaigns. He developed the look and feel of the opening sequence for MTV’s Lyricist Lounge Show, EA Sports video games NBA Street and NFL Street, and the world of Slum Village’s award winning music video “Tainted.”

BUA’s line of apparel and a limited edition shoe line with PF Flyers sold out completely. BUA went on to create his own animated series Urbania and was the host of the Ovation TV series American Revolutionaries, later directing his own Ovation documentary on the legendary DMC, entitled Walk This Way. In 2012, BUA accepted an NAACP Image Award and a Telly Award for his art direction in Kareem Abdul-Jabbar’s documentary film On the Shoulders of Giants.

As a longtime vocal vegan and health-advocate, BUA recently created The BUA Bar, a raw, organic chocolate bar for people with “old-school tastes and new-school sensibilities.”

In June 2013, BUA became the first artist to launch an online school with ArtistWorks, allowing beginning and advanced students around the world to study his curriculum and interact one-on-one through video exchange.

BUA exhibits throughout the United States and internationally—including recent shows at the Los Angeles County Museum of Art and Pop International Gallery, New York. His energetic and vocal worldwide fan base ranges from former presidents, actors, musicians, professional athletes and dancers, to street kids and art connoisseurs. He’s also the Dad to a vegan daughter and partner to wonderful children’s book author and illustrator Ruby Roth.

“Street Art is the most accessible art form there is— it takes art out of the galleries and into our everyday surroundings with themes reflecting our social and political climate as well as fun, vibrant, and bold forms of self-expression from those who create it,” said Rod Aissa, Executive Vice President of Original Programming and Development, Oxygen Media. “The artists on ‘Street Art Throwdown’ are competing in a physical, emotional and creative journey to not only discover themselves as artists, but also catapult their careers with a life-changing grand prize.”

The contestants are given opportunities to create vibrant art in never-before-seen ways, with challenges ranging from murals to installations and 3D paintings to guerilla art. Real-life brands participating in the series include Polaroid and D.A.R.E. (Drug Abuse Resistance Education). Each episode will feature two challenges testing the artists’ abilities and drive, beginning with a mini art-stunt dubbed “The Hustle,” where the contestants must create a quick piece while confronted by environmental obstacles. The winner is given an advantage in the next challenge, “The Throwdown.” In this elimination round, the competing artists will be tested on their stamina, strength and efficiency as they create a large-form piece or mural in hard to reach locations and under harsh conditions. Joining BUA on the judges’ panel is Lauren Wagner, who brings a fresh perspective to the competition and demonstrates that there is an ability to merge the gallery and street art worlds together.

For more “Street Art Throwdown” content, fans can visit the official show site to see exclusive video, behind-the-scenes photos, cast blogs, news, interviews and bios.  While each episode premieres, viewers can see and interact with real-time content synched to the show, including chats, photos and more in Beamly TV rooms on the website. In addition, fans can check out the official Facebook page and join the conversation on Twitter or Instagram using the hashtag #StreetArtThrowdown.