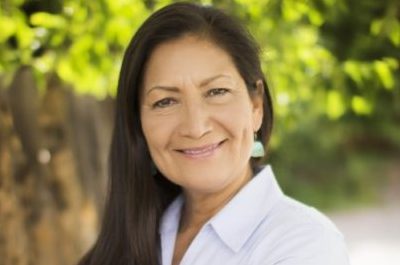 Doctor Who Worked With Mother Teresa Teaches Us Enlightened Eating

If elected, Deb Haaland would be the first Native American woman in Congress in American history, and it would be about damn time.  And her platform is perfection; she has a track record of standing up to Donald Trump, and wants to double down on a commitment to clean energy in New Mexico, by creating good paying jobs harnessing the power of our natural resources. When a hardworking New Mexican wants to start or expand a small business, Deb want to make sure they have that opportunity. “And, it’s time we make smart investments in education and find real solutions that pull our kids and all New Mexicans out of poverty,” she says. Both of her parents served in the military, and she believes we have a duty to take care of veterans. “I’ve spent my life standing up for my community, and I’ll do the same for us in Congress.”

Perhaps the clincher, 350 Action, the political arm of 350.org, and renowned author and environmentalist Bill McKibben announced today their combined endorsements of Deb Haaland for Congress. These major environmental endorsements continue the drumbeat that Deb Haaland is the proven progressive champion in the NM-01 Democratic primary race — because she is someone who has not only lived progressive values, but will also lead the fight for them in Washington.

“We no longer just need politicians who ‘believe’ that climate change is real — we need leaders who will truly champion the issue and make a difference. New Mexico has so much to lose from global warming and so much to gain from making use of its endless clean energy. This race is really crucial. As she showed at Standing Rock, Deb understands that this is ultimately about justice. We’re about out of time to address this crisis, so it’s good news that Deb Haaland is running now and running hard!”

“This endorsement means the world to me. As a lifelong environmentalist, I believe we must act swiftly to combat climate change, keep fossil fuels in the ground, and move to 100% renewable energy. Already, extreme weather, droughts, and storms fueled by climate change are ravaging the Southwest. And yet, the Trump Administration, Republicans, and their friends in the fossil fuel industry are willing to throw our communities and our planet under the bus in their quest for higher and higher profits.

God or What’s Faith Got to do With It?

In Congress, I will lead the resistance to new fossil fuel infrastructure that is poisoning our families and wrecking our climate, and will fight for tens of thousands of solar jobs here in New Mexico as a part our transition to 100% clean energy. I am honored to have this endorsement.”