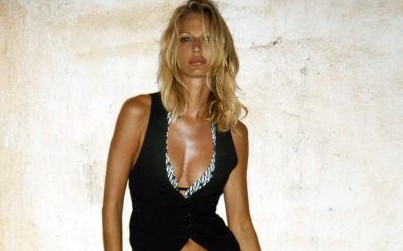 If you live in any major metropolitan city and have a friend in high fashion, you’ve likely heard a nightmare story about Terry Richardson, acclaimed fashion photographer. GGA has heard so many different stories from so many different sources that when this petition to “H&M, Mango, Supreme, Tom Ford & All Other Big Brands” that stated “Big brands: Stop using alleged sex offender & pornographic Terry Richardson as your photographer” came out and received over 13k signatures, we were hardly surprised.

Most of the stories we’ve heard have included Richardson allegedly ejaculating on his female models while photographing them. Often, we were told, he allegedly did it so slickly that they didn’t even know what had happened til it was over and done. Most models are too afraid to speak out and risk their standing in the industry.

The sickest part of all: The industry protects and cushioned this mans actions. Despite numerous complaints. Allegations and complaints have been publicized from the likes of Coco Rocha, Jamie Peck and Danish Supermodel Rie Rasmussen against Richardson.

Terry Richardson has produced countless pornographic photographs however two that particularly stand out are one of a woman in a trash can giving Richardson a sexual favor as if to suggest she is ‘garbage’ and a picture of a woman giving Richardson a sexual favor with the word ‘SLUT’ written on her forehead. Why are the big brands we buy from associating themselves with this kind of imagery? This is the man who said “it’s not who you know, it’s who you blow. I don’t have a hole in my jeans for nothing.” One fashion insider says agencies “know full well Richardson’s predatory behavior,” but that he “is tolerated because the industry folk are just sheep. There are only a handful of photographers who have the power, a handful of editors who have the power, and a handful of clients who have the power. Everyone else just follows this small group of people.” There are dozens of pictures (beware before clicking that link – they are SUPER graphic porn images) saved of him having sex with models, models felating him, Richardson ejaculating on models.

Model Alliance responded to a model friend this way;

We are aware of TR’s exploitative practices, as are many others in the industry. For what it’s worth, some top models and editors no longer work with him as a result, but it’s still very troubling. That’s why we established Model Alliance Support, our free and discreet grievance and advice service for our members. We hope that you will encourage your models to become members and get involved with the Model Alliance’s efforts. It’s difficult and intimidating to speak out as an individual, but when models speak collectively, we can make a tremendous difference.

Supermodel Liskula, and long time BFF to GGA, wanted to share her personal story of working with Richardson. She’s exceptionally brave to come out with her story of having worked with Richardson when she is a single Mother who still makes her living modeling. We hope you’ll read this story, share it, and sign the petition to stop these alleged abuses against women (though most of the time these models are hardly women – often in their early teens.) We especially hope well known female icons like Ellen DeGeneres and Mylie Cyrus stop going on and on about how gifted he is. Talent means nothing when it comes to this horrific behavior.

My name is Liskula, I modeled for 23 years in NYC, Paris, Milan, Sydney, Tokyo and many other places. I worked with all of the top magazines, designers and most of the great photographers. I really enjoyed my job, and I made it last a lot longer then most. I had a few bumps in my road, but for the most part being in the fashion industry was a great experience. I made some amazing friends and travelled the world. I wouldn’t change any of it, except for the story I am about to tell you
. 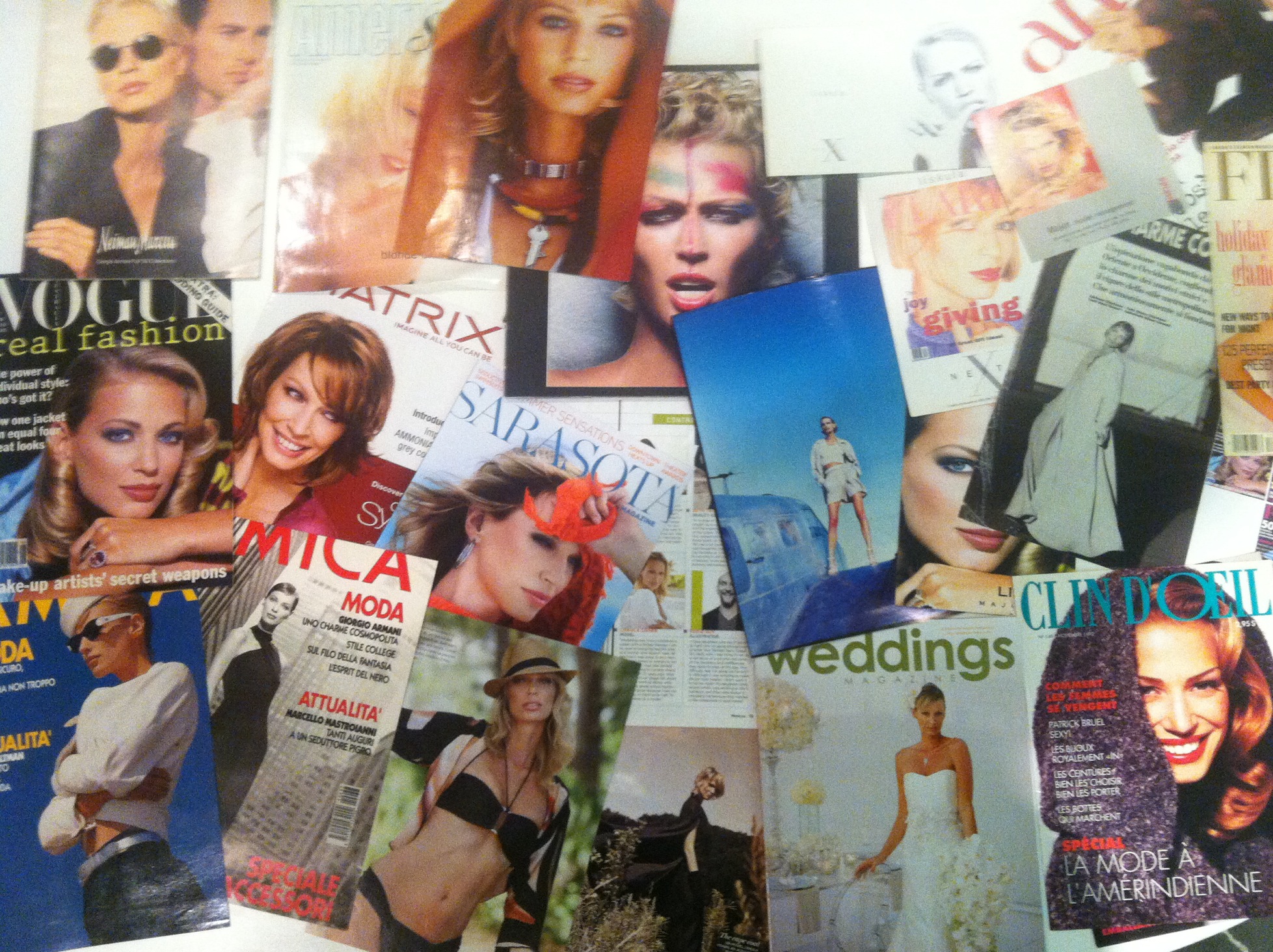 I would like to state foremost that I worked with him once.. and I would never work with him again. Not even if it was a zillion dollar contract with security guards and my own mother present. This monster has brought me so much unhappiness in my life from one photo shoot. You may think that is crazy, but it’s true. No, he did not rape me, he did not touch me in anyway. But he did make me feel so uncomfortable that I walked off the shoot. In 24 years of modeling I have only walked out once. He made me feel as if I was a prostitute, a whore or even less then if possible. He quickly got another girl there to fill my void, and I would have been happier if the images never reached the magazine. But they did, and of course it was my face and sticker covered breast on the cover of an International Vogue magazine.

I agreed to do the job because it was with him, because I thought I would get at least one decent picture in a normally fantastic magazine. I did not. In fact I went around buying every copy I could off every magazine stand I knew, just so other people wouldn’t see it. I know that sounds futile, but I think it worked. Nobody ever asked me about it, and I was happy with that. But to this day I read articles about girls being treated as I was, and much worse, and it makes me want to scream. How is it possible that this man can do this to so many young women and still have two legs to walk on? How is it that he is paid top dollar to make women like myself hide his dirty images away so nobody see’s them?

I still have one copy of that magazine, and I have kept it as a reminder of the biggest regret in my career. To make sure I never let a man, or person of power treat me like that again.

The shoot was a take off of a big scandal in Europe where two affluent men were caught wife swapping, and having kind of public relations with these ladies. Being a model, and considering this was an upscale magazine, I thought the shoot would be kept clean. That was my first mistake. My second mistake was not leaving before he took the first picture. The male models that were hired were not in fact models, nor were they actors, they were two men he knew. And one had fallen down an elevator shaft and had a huge scar in his hair line and talked like am insane person. So you can imagine I was not exactly comfortable with him being my faux husband. After a few shots, and after the men and Terry drank a few too many drinks the requests got raunchier and more appalling. He wanted me to be completely naked and pretend to give this faux husband a blow job, while he was also naked. That’s when I walked out. I don’t do naked, and I don’t simulate sex. 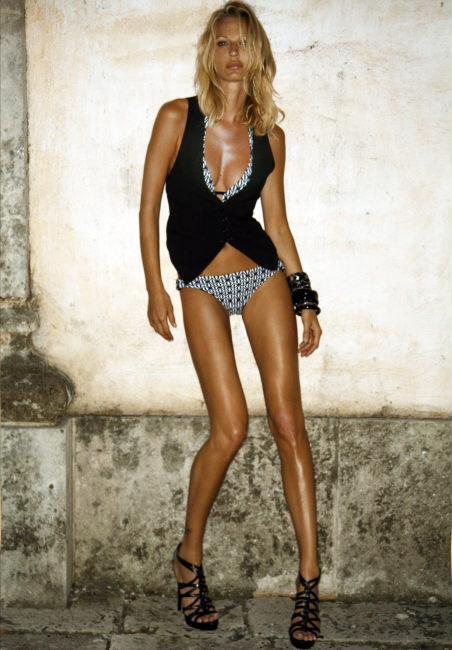 I heard the next day by the other wife on the shoot that the new girl Terry brought in was actually a porn star and that “things got really out of hand.” Jeez, I thought to myself, they were out of hand when I left what more could have happened. It turns out that the new wife apparently had no issues having sex, and giving blow jobs to both faux husbands and that they apparently had no qualms ejaculating on her for Terry’s images. This is what he calls art! I sure am happy I left when I did. And if I remember correctly, the other original wife left shortly after I did.

Needless to say I have never shared the images or this story with anyone. I live with this guilt inside of me, that I did something terribly wrong. That I acted as if I had no morals. Well I opened that magazine today and looked at all of the images, and it is quite obvious that I am clearly uncomfortable and trying my hardest to keep my morals intact. Terry has no morals, it is plain to see.

I want other girls who read this to know that if you do something like this, you will survive, but it will haunt you. I have scoured the internet for these images and thankfully they are nowhere to be found. But it haunts me in my own mind. I would hate for my daughter to see these images, and I will certainly dispose of this last copy tomorrow. That shoot was nearly 12 years ago and it still outrages me, makes me feel queasy, and makes me feel ashamed. I am a 41 year old mother and this is how my work experience with Terry has left me.

This person should not be allowed to do this to one more girl, if he wasn’t getting paid from Vogue he would certainly be seen as a predator and more then likely in jail.

Agents need to start protecting their models, they need to make a stand and say NO! to Terry Richardson. I remember my old agent wouldn’t let me do a McDonald’s commercial, because it wasn’t upscale enough for my image. But it was paying big bucks. But getting paid nothing for Vogue to be humiliated and made to feel like a piece of trash by Terry Richardson is worth while. Go figure.

I quit modeling for a year after that shoot, and I knew that if I was ever in a situation like that again I would have called the police. After that I was always on guard, I was always wondering if this guy was going to treat me like that, or if this job was going to end up with me walking out.

It never happened again. I did see him a few times walking around in Soho and it took everything in me to not scream at him. He did ask me once to sign a release so he could use some of those images in one of his books, I declined. I dare him to use those images anywhere, I will go after him just like I went after Google. But this time for money!

Singed a pissed off ex-model and a concerned mother

UPDATE: Yet another model has come forth to reveal a horrific tale of shooting with Richardson.